Producers have their eyes on Stacey and Joe.

Stacey Solomon and Joe Swash are reportedly in talks to join This Morning. The news comes after current presenters Holly Willoughby and Phillip Schofield were hit with backlash after they reportedly skipped the queue at Queen Elizabeth's lying in state.

Stacey Solomon and Joe Swash are reportedly in the lineup to take over from the duo. Producers have been keen to sign the newlyweds for quite some time.

They have been making plans for the future as they know Holly and Phillip won't be part of the show forever.

However, they are not replacing them just yet.

Following the incident at the Queen's lying in state, producers now fear one of both of them could quit the show.

There have been calls for the pair to be fired from the show, with over 70,000 people signing a petition to have them fired. However, despite the backlash, ITV has defended both presenters.

Most recently producers said Holly and Phillip are innocent. 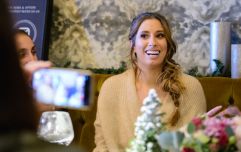 Too early? Stacey Solomon shocks fan after they spot Christmas tree in her house

END_OF_DOCUMENT_TOKEN_TO_BE_REPLACED

She said: "They did have accreditation. Lots of people saying they didn't."

She continued, "They were sent by This Morning to do a piece for September 20, which ran.

"They were to interview people inside and outside. They also didn't displace anyone in the queue."

Both Phillip and Holly have apologised over the controversy but have stressed they did nothing wrong.

Holly was reportedly "distraught" over the backlash because she would never do something like that.