Stacey Solomon admits she was self-conscious about not being a "young, virgin bride"

"Sometimes those old-fashioned narratives make you feel that way"

Stacey Solomon has admitted she felt self-conscious about her upcoming wedding to Joe Swash.

The mum-of-four said she was letting societal pressures get to her.

Stacey explained that she had been putting off choosing a wedding dress because she wasn't a "young, virgin bride".

It may be a dated notion, but Stacey said it was still affecting her.

Despite her worries, Stacey confirmed she picked her wedding dress this week.

She shared, "I never want to forget this feeling…"

"I’ve been putting it off I think because the more I got excited about it the more silly I felt for some reason."

"I started feeling really conscious about not being, well I don't know, a young virgin bride. I know that's ridiculous because I wouldn't have done life any other way EVER.

The presenter said she's so grateful for how her life has turned out. 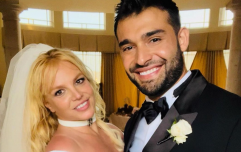 END_OF_DOCUMENT_TOKEN_TO_BE_REPLACED

"But I suppose sometimes those old-fashioned narratives make you feel that way, don’t they?"

Stacey said trying on wedding dresses at her home was a magical experience.

"I loved every single second of today, trying them on, imagining seeing Joe for the first time, feeling the veil on my shoulders & seeing the glitter sparkle as I moved around."

She stressed that you should never let anyone or their views dampen your day.

"And no matter who, how, or what way around you do it, it’s the most special moment ever."

Stacey is due to marry her long-term partner Joe Swash this summer.

The couple has two children, son Rex and daughter Rose, together.

Stacey also has two sons from previous relationships. Joe is also a dad to son Harry from his relationship with Emma Sophocleous.

You may also like
3 weeks ago
Bride 'disturbed' by what she found future mum-in-law doing with wedding dress
1 month ago
I refuse to pay for my daughter's wedding because she's a grown woman with a job
1 month ago
Bride wants to stop fiancé's three-year-old from attending their wedding
1 month ago
Bride asks to remove niece as flower girl "because of how she looks"
1 month ago
Pregnant bride goes into labour on her wedding day four before due date
1 month ago
"Where are your kids?" Kourtney Kardashian hit with backlash over her wedding
Next Page