Storm Brendan has passed but there's still a risk of strong winds, hail and thunder

It's not looking great.

Storm Brendan pretty much battered the country yesterday, however even though the weather warnings have been lifted and the storm has seemingly passed, it will still be a very rough and breezy day.

The weather forecaster said that there may even be a risk of hail or thunder as the evening goes on.

Met Éireann said: "Cold today, with scattered showers at first. More persistent rain will extend from the southwest during the morning and early afternoon, with some sleet and hill snow.

"There will be some heavy and possibly thundery falls, mainly in parts of Munster and Leinster, but amounts will be smaller in the west and northwest. Clearer conditions, with scattered showers, will extend from the west during the afternoon and early evening.

Cold today, showers at first. Persistent rain will extend from the southwest during the morning & early aft, with some sleet and hill snow.Heavy & possibly thundery falls, mainly in Munster & Leinster. Scattered showers later. Highs generally 3 to 6C, but milder in the SE. pic.twitter.com/N790NKi5mV 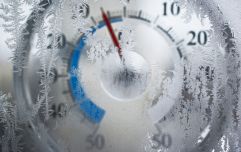 Sleet and snow predicted for some parts of Ireland today, says Met Éireann

END_OF_DOCUMENT_TOKEN_TO_BE_REPLACED

"Maximum temperatures 3 to 6 Celsius generally, but milder in the southeast. Winds becoming mostly light to moderate southerly or variable for a time, later mostly moderate west to southwest. However, but it will become very windy on the southeast coast for a time in the afternoon, with strong and gusty southwesterly winds."

Meanwhile, tonight will be very much the same, with winds and frost.

Be careful out there!


popular
Positive parenting: The ONE thing you should do when you have lost it and shouted at our child
The flattering €16 Penneys dress we'll be wearing every day for the foreseeable future
"Just take the picture" – one dad shares beautiful reminder to capture mum in pictures
Is letting your baby sleep in your arms a bad idea? Not really, say these experts
Someone edited together what Ross and Rachel's family would look like in 2020
Johnny Ward and former dance partner Emily Barker are officially a couple
Babies born via C-section have very different microbiome in their gut than babies born vaginally
You may also like
1 week ago
A weather warning has been issued for 17 counties in Ireland
3 weeks ago
Met Éireann predicts the weather will get 'drier and milder' leading into the New Year
4 weeks ago
Met Éireann say we're in for a 'sunny and fresh' day, but it will take a turn tonight
1 month ago
Met Éireann says that prolonged heavy showers will wash over the country today
1 month ago
Met Éireann say conditions will be frosty, foggy and wet today
1 month ago
Met Éireann's weather forecast for the weekend is looking as grim as ever
Next Page