Tánaiste Joan Burton has said that she wants to see “full GP care for all” under the next government.

Speaking at the launch of 'Towards a new National Community Health Service' the Labour leader said that the party was going to be focusing on the development of primary care.

"Our ultimate aim is to provide a comprehensive system of primary care free at the point of access," she said.

"To date we have provided free GP care for the youngest and oldest in our society. We have set aside funds to extend the service to older children later this year."

Speaking about the last five years, Burton described them as "challenging for the health service and the people who work in it."

She added: "It has been a time of change; a time of reform and a time when resources have been stretched. The system is far from perfect. But there have also been significant successes."

According to RTÉ News, the party apparently plan to invest €1.5bn in primary healthcare services and increase the number of GPs. 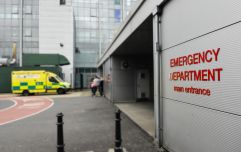 END_OF_DOCUMENT_TOKEN_TO_BE_REPLACED

The four discussed a number of topical issues including Repeal the 8th, the housing crisis and medical staffing.

What do you make of these plans? Did you see last night's debate? Let us know what you think in the Facebook comments or on Twitter @HerFamilydotie.

popular
Dad asks public to forgive his wife after she killed their three children
16-year-old boy appears in court following murder of teenage girl
Colin Farrell says being nominated for an Oscar is "a bit of craic"
Little boy dies of cancer after doctors ignored mother's concerns six times
Fans call out Jake Paul for insensitive comment on Molly-Mae's baby announcement
Tributes pour in for 22-year-old woman killed in Mayo crash
Molly Mae says becoming a mum is the best thing that ever happened to her
You may also like
2 weeks ago
Irish parents struggling to find medicines including Calpol
4 weeks ago
"Absolutely outrageous": Parking at new children's hospital to cost €10 a day
3 months ago
Five maternity hospitals won't provide abortions until 2023
7 months ago
Disney and Netflix among US companies announcing they'll cover employees' abortion travel costs
9 months ago
First ever mother and baby mental health unit to open in 2024
1 year ago
Musings: Muslim women in Ireland are being failed by the maternity system
Next Page