A huge congrats is in order for Catelynn Lowell and her partner Tyler - they're expecting a baby.

The Teen Mom star announced the news on the TV show, which airs tonight, however a special promo of the moment was shared on social media today.

In the clip, the couple's daughter Novalee Reign arrived into a room where Tyler was sitting, wearing a t-shirt that says "I'm going to be a big sister."

Tyler asked, "Why do we have that shirt?", to which Catelynn said, "Because she's going to be a big sister!"

Cue the crying and emotional hugs! The whole family is so happy!

Later in the clip, Tyler asks, "How many did you take?" before Catelynn admitted to taking four pregnancy tests.

"Oh my gosh! You're a fertile myrtle," he joked. 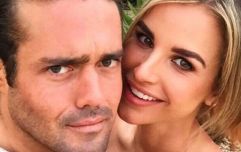 END_OF_DOCUMENT_TOKEN_TO_BE_REPLACED

The moment was caught by the MTV cameramen while they were filming for the latest season of Teen Mom OG. The episode was filmed last October, as throughout the episode, the moms are all doing Halloween activities with their kids, including visiting local pumpkin patches.

SCREAMING Happy Birthday to my main boo, my best friend, and my lover!!! 26 has never looked so good! Thank you for all you do for Novalee and I. Your an amazing father and THE best husband! I love you so much! ❤️? @tylerbaltierramtv

Earlier this month, Catelynn checked herself into a treatment facility for unknown reasons, and after she completes a six week programme, she plans to be straight back home with her family.


popular
Aldi to limit number of Christmas toys customers can purchase
Level 5: What is a social bubble and who can have one?
4 seriously clever parenting tips we should be taking from Danish parents
Domino's is giving away free pizza to Ireland's frontline care workers
Bottle-fed babies ingesting 'millions' of microplastics each day, new Irish study finds
Aldi will be releasing even more 'knock out' toys in the run up to Christmas
Small Irish businesses you can buy from online during the COVID-19 shutdown
You may also like
2 days ago
Pregnant in your 20s or 30s? Reese Witherspoon did both – and is very honest about which was easier
3 days ago
Five fantastic products that kept my skin glowing during pregnancy
2 weeks ago
Dunnes Stores launches brand new maternity collection – and it's not only affordable, but gorgeous too
1 month ago
Keeping it a surprise: 9 reasons NOT finding out the sex of my babies was the best thing ever
1 month ago
Whoops! Chrissy Teigen just accidentally revealed her baby's sex in the cutest slip of tongue
1 month ago
Meghan Markle craved one very specific thing when she was pregnant – and we're not surprised
Next Page