In a bold (and long overdue) move that we are liking a lot, Target will no longer sell toys for boys and girls - instead, it will just sell toys for children.

The US retail company, which hit headlines last month for its breastfeeding-friendly policy, has announced it will remove gender-based labels on children's toys, bedding and entertainment products.

The decision, the company says, comes after feedback and suggestions from customers.

Back in June, mum Abi Bechtel's tweet, below, went viral. Her complaint on the issue wasn't the first, but it definitely grabbed a lot of attention.

Don't do this, @Target pic.twitter.com/cfh3cp5Nqa 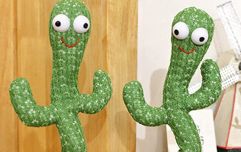 END_OF_DOCUMENT_TOKEN_TO_BE_REPLACED

A statement from Target reads, "As guests have pointed out, in some departments like Toys, Home or Entertainment, suggesting products by gender is unnecessary. We heard you, and we agree. Right now, our teams are working across the store to identify areas where we can phase out gender-based signage to help strike a better balance."

Changes, which will happen over the next few months, will include signs in the kids’ bedding area no longer featuring suggestions for boys or girls, just kids. Reference to gender - including the use of pink, blue, yellow or green paper on the back walls of shelves - will also be removed in the toy aisle.

We think it's a great move. Now if other retail companies could just take note.


popular
My sister wants to marry our dead sister's husband- how could she do this?
Get the most out of the latest sales with this Irish online shopping service
You can now stay in the house from Home Alone
12 Elf on the Shelf ideas that your child is bound to love
Nearly there now: 10 easy – but fun – Elf on the Shelf ideas for the last few days
Aunts are as important as mothers when raising daughters, study finds
Louise Redknapp responds to claims she's in "despair" over Jamie's new baby
You may also like
1 month ago
Heads up: Aldi has a gorgeous toy collection coming this month
1 month ago
The 10 Toys Amazon Predicts will be trending for Christmas 2021
1 month ago
Tesco is having an early Christmas toy sale this month
2 months ago
Rent, don't buy – Ireland's first toy rental club has opened and here is how it works
3 months ago
This song is scientifically engineered to make your baby happy – does it work?
3 months ago
Toys shops issue warning to parents we are facing a 'toy shortage' this Christmas
Next Page