Every year, Prince William and Kate Middleton release a photo to mark the festive season as a thank-you gesture and since their children have arrived, it gets more adorable every year.

The 2019 card features the family of five, it appears to have been taken during the summer and honestly, it couldn't be more adorable.

Kate's printed Boden dress, George's mop of blond hair and Charlotte balancing on the bike with that mischievous grin we've come to recognise in recent times - it's a truly stunning family album shot.

Prince Louis is a proper little boy, not a baby anymore, Princess Charlotte seems as impish as ever and Prince George's is barely recognisable from the little chubby-cheeked toddler we remember.

The card has not yet been officially shared by Kensington Palace but it appeared online earlier today.

The Cambridge Household family Christmas card this year features The Duke and Duchess of Cambridge with their three children, Prince Louis, Princess Charlotte and Prince George on a motorbike and sidecar ❄️? pic.twitter.com/pNg3zPJXqS 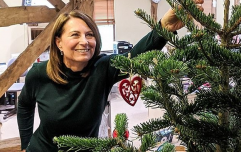 END_OF_DOCUMENT_TOKEN_TO_BE_REPLACED

Of course, royal fans are only delighted to see a glimpse of the children and it's clear to see they're growing up fast.

It has been reported that Prince George and Princess Charlotte are now old enough to join their parents at Christmas Day mass, something they were previously deemed too young for.

There have been rumours regarding the Christmas card from the Duke and Duchess of Sussex with reports suggesting it will also be released this week.

Apparently, Harry, Meghan and Archie's festive greetings will feature his grandmother Doria Ragland and this has been described as a break from royal protocol as traditionally, the annual Christmas cards don't feature grandparents.

Kate Middleton's parents, Carole and Michael, never appear on the cards and so it would be seen as a departure from the norm if Harry and Meghan were to include Doria.


popular
Influencer justifies trip to Dubai saying it was essential for her "mental health" and to "motivate" followers
Schools "will reopen" on phased basis from February
Study finds husbands with controlling wives live longer and are healthier
12 oh-so-sweet one-syllable baby names that we absolutely adore
Leo Varadkar says if Ireland introduced mandatory hotel quarantine, it would be for a year
RTÉ are introducing new educational programmes aimed at those sitting their Junior- and Leaving Certs
CJ Fallon and Edco now providing free access to their books until end of term
You may also like
3 months ago
The Cambridge kids interview Sir David Attenborough in brand new (adorable) video
7 months ago
Kate and William are pretty strict about school nights when it comes to George and Charlotte
8 months ago
This smocked baby bodysuit from Next is giving us royal vibes
1 year ago
Kate Middleton says that she felt 'so isolated' after the birth of Prince George
1 year ago
Prince George wakes his mum and dad up every morning in the most hilarious way
1 year ago
Kate Middleton arrives for Christmas lunch with the Queen and her outfit is impeccably festive
Next Page