'Temporary feels like a long time': Over 500 children homeless in Galway

“The number of children experiencing homelessness in Galway would fill an entire school."

That's according to homeless charity COPE, who recently released their annual report on people affected by homelessness and domestic violence in Galway.

Their data shows that in 2016, the charity worked with 702 adults and 512 children who were living in emergency accommodation in the city.

They were also aware of 314 individual women and 158 children who experienced domestic violence during that time.

To highlight the seriousness of these numbers, COPE has created a video about child homelessness called Katie's story.

Katie's story is similar to the hundreds of other Galway children who have found themselves living in emergency accommodation.

She and her brothers have moved around a lot over the past two years.

Katie can't have her friends over to play in the hotel that she lives in.

Katie also can't have birthday parties or make noise in the hallways in case she disturbs the other guests.

END_OF_DOCUMENT_TOKEN_TO_BE_REPLACED

She and her family have been in emergency accommodation for so long - it's the only way of living that her younger brother has ever known.

Katie is thankful that she has been able to stay in the same school while she moves, but the shortage of houses in Galway means that her family do not have a proper place to call home. 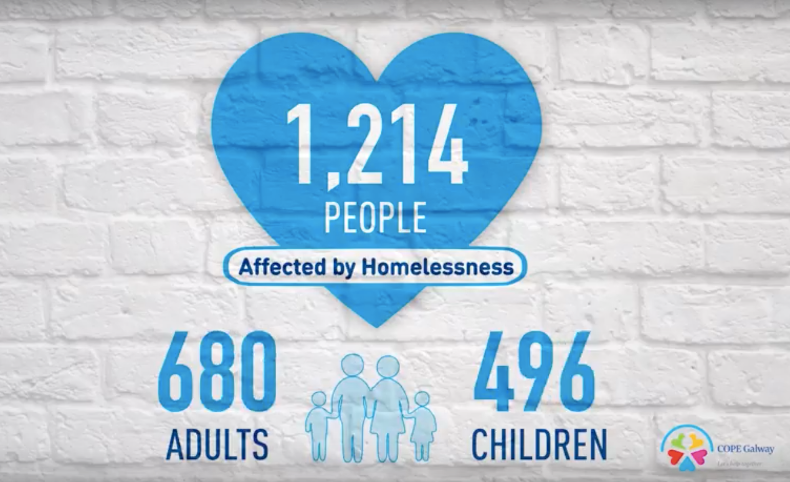 Katie and her brothers were allowed to bring one toy with them to the hotel.

She chose her favourite teddy. She tells him her worries night.

Katie knows that her situation is only temporary, but to her, "temporary feels like a really, really long time."

There are hundreds of other children like Katie in Galway and around the country.

Just last week, the number of children in Ireland living in emergency accommodation passed the 3,000 mark for the first time.

Various groups and charities are calling on the government to address the housing and homeless crises in next year's budget.

You can donate to COPE Galway here.

popular
Today FM's Paula MacSweeney welcomes baby boy
Viewers believe Bluey is a rainbow baby- check out the theory
Expert says Cocomelon acts "as a drug" to kids' brains
Hilary Swank, 48, reveals she is pregnant with twins
Kelly Clarkson admitted she spanks her children if they misbehave
DIY: How to transform your old trampoline into a super-cosy 'summer hideout'
4 ways to fix hard slime with ingredients you probably already have at home
You may also like
2 months ago
Family wanted for The Green Irish Road Trip with Clayton Hotels
3 months ago
Elderly woman found dead after tragic accident in Galway
4 months ago
Galway announced as one of Europe’s top 10 cities for raising a family
4 months ago
Things to do in Galway with kids: family fun for when you head to the Wesht
5 months ago
Camogie player Kate Moran was reportedly wearing a helmet during tragic match
11 months ago
Young woman suffers "life-changing injuries" after being hit in face with firework in Galway
Next Page