There could soon be significant disruption for Ryanair passengers as its Irish pilots have voted in favour of striking.

An overwhelming majority – 94 per cent – of pilots backed industrial action in a ballot today, according to the Fórsa Trade Union.

This comes amid a dispute over pay and conditions.

It's not yet clear when a strike would take place. The union must give the airline at least a week's notice, meaning passengers travelling with Ryanair later in this month could be affected.

Fórsa has given the budget carrier until Monday to agree to its proposals. It will outline details of industrial action within seven days if a deal isn't reached, it said.

Pilots, he continued, "feel they have been forced into contemplating potentially-disruptive industrial action by a company that seems either unwilling or unable to negotiate in a professional and constructive manner."

Ryanair in "a healthy financial position"

The union submitted a pay claim in March "in line with sector norms" and has accused the company of stalling in its negotiations. 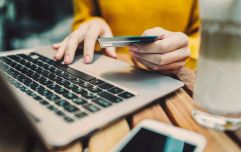 END_OF_DOCUMENT_TOKEN_TO_BE_REPLACED

Ryanair, which posted profits of €1 billion last year, is in "a healthy financial position and can fairly reward its pilots," it added.

The British Airline Pilots' Association is engaged in its own pay dispute with the company.

The Irish Travel Agents Association (ITAA) has warned of the far-reaching ramifications of any strike.

Both holidaymakers and corporate travellers would be impacted during the busiest time of the year for the travel industry, while there would also be a knock-on effect for connecting travel and accommodation.

It's urging customers who have booked through a travel agent to speak to their agent in the even of a strike.


popular
13-year-old boy passes away after coming into difficulty while swimming
Applications for the Late Late Toy Show 2020 are now open
The €9 buy fans swear is an EXACT dupe of Estée Launder's popular Double Wear foundation
Hasbro pulls Trolls doll from stores over button some say promotes child abuse
The tooth fairy letter many parents are feeling a little divided about
Hello autumn: Sostrene Grene launches new collection that'll make you long for cosy nights in
10 Gorgeous Family-Friendly Irish Airbnb Houses (For The BEST Staycation Ever)
You may also like
1 day ago
Staycation: Top 10 family days out to make break for before the kids head back to school
6 days ago
Staycation: 5 Irish heritage sites we're absolutely hitting up this summer - and they're all free
1 week ago
Staycation: My 10 tried and tested mum-hacks for better beach days with kids
1 week ago
Staycation: TripAdvisor has revealed the top 10 hotels in Ireland for 2020
1 week ago
Explore Northern Ireland’s world-class food scene with a brand new dine out for half price incentive
1 week ago
Dromoland Castle introduce dog-friendly rooms to give your pooch the perfect stay
Next Page