'A time for grieving...' Charlotte Church has lost her unborn child

Last month, Charlotte Church announced that she was expecting her third child.

Tragically, however, the singer this evening confirmed that she and her partner were "grieving" and that the pregnancy has now sadly ended.

A message on her Twitter profile read: "Charlotte and Jonny are very sad to announce that they lost their baby. Now is a time for grieving and being together as a family."

1 of 2 Charlotte and Jonny are very sad to announce that they lost their baby. Now is a time for grieving and being together as a family.

Ms Church has been with musician Jonathan Powell for seven years and has previously admitted that more children are on the cards for the pair.

It is not known how far along in the pregnancy she was.

In May, the 31-year-old had been on stage performing with her Pop Dungeon Band at the Birmingham Pride festival when she made the surprise announcement to fans.

2 of 2 We kindly ask everyone to respect that peace. 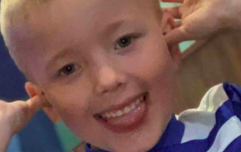 END_OF_DOCUMENT_TOKEN_TO_BE_REPLACED

Charlotte and Gavin dated for more than five years from 2005-2010 and were at one stage one of the highest-profile young couples of the tabloid-era.

Her relationship when Jonathan has gone from strength to strength, however, and in a recent interview she stated: "I’m really happy with my dude. He’s lush, he’s so smart and he really looks after me."


popular
'19 Kids and Counting' star allegedly downloaded "most offensive" child porn agents ever saw
Maureen Lipman quits Celebrity Gogglebox and slams the show's editing
"She is too young": Kourtney Kardashian mum-shamed over daughter's latest TikTok
WATCH: The Mothership — Fighting for the right to be your own child's parent
Brother of Amber Gibson charged in connection with her death
My wife wants to give our twin boys matching names and I think it's a terrible idea
Babies born in December have some very unique traits – and you'll see why
You may also like
3 days ago
Woman's body discovered in Co Clare waters as investigation launched
3 days ago
Meabh Feerick dies after sharing that she felt "let down" by Irish healthcare system
3 days ago
Almost 30,000 calls made to Women's Aid during the pandemic
3 days ago
Baby and toddler among 4 killed in Barcelona fire at abandoned bank
1 week ago
Australian police fear for welfare of baby whose parents claim they left with woman in shop
1 week ago
Noah Donohoe's mum Fiona calls for all police files on his death to be released
Next Page