To tea or not to tea: that is the question.

I couldn't go a day without drinking at least one cup of tea. I never get sick of it, even in the summer when it's roasting hot outside. I'll still put the kettle on. It's a comfort, a habit and so very Irish.

There aren't many things that can't be solved by having a cuppa.

Unless you're a toddler.

One mum has been hit with a wave of backlash after she shared a TikTok of her child drinking a cup of tea.

Fellow parents were quick to call her out after she posted the controversial video.

Many expressed their concerns about the amount of caffeine in your average cupán tae.

One woman wrote, "Tea is just as bad as coffee, it’s filled with caffeine which is bad for babies."

Another said, "It’s not a good thing though, being addicted to caffeine isn’t a thing to be proud of. And before you say it, I’m English." 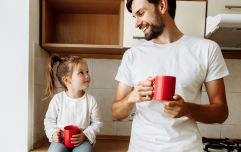 END_OF_DOCUMENT_TOKEN_TO_BE_REPLACED

Another mum warned her that toddlers are too young to consume caffeine.

According to Healthline, black teas are harmful to toddlers because caffeine is a stimulant. It is not recommended in any amount for children under 12.

However, many users admitted they also give their children a hot drink.

One shared, "There’s nothing wrong with him having a brew… he’s enjoying it, that’s all that matters."

"A small cuppa won't hurt him," said another.

Others were worried about the cup itself. The hot liquids could easily spill all over the child.

"That's the worst thought-out kids cup ever," one said.

What do you think? Should toddlers drink tea or was this mum in the wrong?

You may also like
9 hours ago
The reason why mums wake up when babies cry and dads stay asleep is interesting
3 days ago
This mum-to-be is worried she won't love her baby because she's not a kid-person
3 days ago
Mum confession: I keep this note on my fridge to help me be the mum I want to be
4 days ago
"My 16-year-old daughter asked me to buy her a vibrator. What should I do?"
6 days ago
Apparently, dads spend 7 hours a year in the bathroom – hiding from their families
1 week ago
Ryanair passenger refuses to swap seats with mum and baby- was she wrong?
Next Page