The actor has been busy promoting the new Elvis biopic.

Fans have expressed their concerns about actor Tom Hanks after noticing his shaking hands during a movie premiere.

The 65-year-old actor was speaking at the Elvis premiere in Australia.

In a now-viral video, the Oscar winner hand's are shaking throughout his speech at the premiere.

He tries to control his shaking hands during the speech but struggles to do so.

Fans are now worried about the Sleepless in Seattle star's health, but many stressed his blood sugar was likely just low.

Many pointed out that people with low blood sugar will suffer from shaking hands, as well as other symptoms.

One said,“He’s diabetic. This happens to my mom when she gets low blood sugar."

Trembling and shakiness are common signs of low blood sugar. 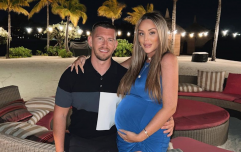 END_OF_DOCUMENT_TOKEN_TO_BE_REPLACED

People may also have trouble concentrating or dizziness.

"Your nerves and muscles are powered by blood sugar. When they don't get enough, they tell your hands to shake."

The actor revealed he was diagnosed with type 2 diabetes in 2013.

Hanks said he was a "total idiot" for ignoring medical advice.

He told RadioTimes: “I was heavy. You've seen me in movies, you know what I looked like. I was a total idiot."

The You've Got Mail star continued, "I thought I could avoid it by removing the buns from my cheeseburgers. Well, it takes a little bit more than that."

"My doctor says if I can hit a target weight, I will not have type 2 diabetes anymore."

Fans believe his recent weight loss is a good sign and he's taking his diagnosis seriously.


popular
TikTok star shows how to avoid sweat stains by using pantyliners
Giving our children experiences rather than toys makes them more intelligent
Ekin-Su and Davide taking their mums to New York with Love Island winnings
Shows like Bluey and Peppa Pig are actually bad for kids, expert warns
Expert says Cocomelon acts "as a drug" to kids' brains
How to keep your fake tan on for longer during the heatwave
Archie Battersbee's mother issues warning about TikTok challenges

You may also like
4 days ago
Olivia Newton-John's daughter shares heartbreaking video filmed before her mum's death
4 days ago
Caitriona Balfe pens moving tribute after her father's sudden death
1 week ago
Lauren Goodger assaulted and taken to hospital after daughter's funeral
4 weeks ago
Pete Davidson talks having a baby with Kim: ‘That’s kind of what I’m preparing for now’
1 month ago
Stacey Solomon calls out paparazzi who were stalking her on hen party
1 month ago
Declan Donnelly heartbroken after the death of his 55-year-old brother
Next Page