Another week, another exciting edition of the Late Late Show.

It's set to be an Irish-focused episode, with loads of local stars featuring this Friday, October 21st.

The big international star this week, however, is actor Richard E. Grant, star of such films as Withnail and I, Corpse Bride, and Can You Ever Forgive Me?

Grant will be talking to Tubridy about his new memoir, A Pocketful of Happiness, which focuses on his late wife Joan.

The pair were married for 34 years before Joan passed away following a bout with cancer, and the book describes "the sadness and rawness that a terminal illness brings to a family".

Remaining in Hollywood, but closer to home, Sing Street's Jack Reynor will be on the couch to discuss his new show on Amazon Prime Video, The Peripheral.

Reynor found his way to the spotlight at 21, and is set to chat about his love for his hometown of Blessington. 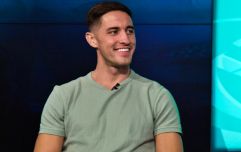 Here's the line-up for this week's Late Late Show

END_OF_DOCUMENT_TOKEN_TO_BE_REPLACED

Naked Camera star PJ Gallagher will touch on his story of mental illness, and to discuss his experience in hospital that saved his life.

Leitrim hurling star Zak Moradi will be talking about growing up in a refugee camp in Iraq, and the importance of community.

RTÉjr are broadcasting a new show, Dizzy Deliveries, which focuses on Lámh, a manual sign language. Ryan will meet some of the children who feature on the show, along with their mothers and fathers.

Musical performances are coming from Malaki and Susan O'Neill, and "a very special not-to-missed Late Late Toy Show update" is coming too...

popular
This is everything women need to know about ovarian cysts
Viewers in tears after last night's emotional episode of DIY SOS
These 40 baby names are set to trend in 2023
Shows like Bluey and Peppa Pig are actually bad for kids, expert warns
Study says that dads get more sleep than mums and tell us something we don't know
Babies born in February have some pretty cool advantages – no, really – it's true
Bride asks for divorce day after wedding following groom's disrespectful cake stunt
You may also like
3 months ago
Downton Abbey star to appear on The Late Late Show this week
4 months ago
George Clooney and Julia Roberts are set to appear on tomorrow's Late Late Show
9 months ago
James Corden announces he's leaving CBS's The Late Late Show
11 months ago
Adam King teams up with An Post to send his virtual hugs around the world
1 year ago
Charlie Bird & Vicky Phelan will appear on tonight's Late Late Show to launch Croagh Patrick climb
1 year ago
Get ready, folks: applications are now open for this year's Late Late Toy Show
Next Page