Does she have a point?

TV presenter Ulrika Jonsson took to her newspaper column for the Sun this week to heap praise on how well-behaved little Prince George and Princess Charlotte were last Monday, when they took part in their great-grandmother, the Queen's, funeral.

Jonsson marvelled at the 9- and 7-year-olds' behaviour, and said William and Catherine have clearly been doing a brilliant job with parenting.

The TV presenter also pointed out that we should all be taking a note out of the royals' book, as most parents today are 'breeding a nation of spoiled brats whose every whim has to be catered for.'

"It’s in no one’s interests to steal the show at a funeral. It’s neither the time, nor the place," Jonsson wrote.

"But my golly, if there was an award for outstanding perform­ances, it must surely go to Prince George and Princess Charlotte — aged nine and seven respectively — for their impeccable behaviour. You could say there were adults in the congregation who displayed less upright conduct and demeanour than these two young, impressive creatures."

The youngsters were visibly emotional at times during the sad event, and the Princess of Wales was seen to comfort them both as they seemed to wipe away tears. But the pair's 'impeccable behaviour did not go unnoticed by many.

"I won’t be the only parent who was astounded by their ability to melt into the crowd of mourners at the Queen’s funeral, without attracting the wrong kind of attention." 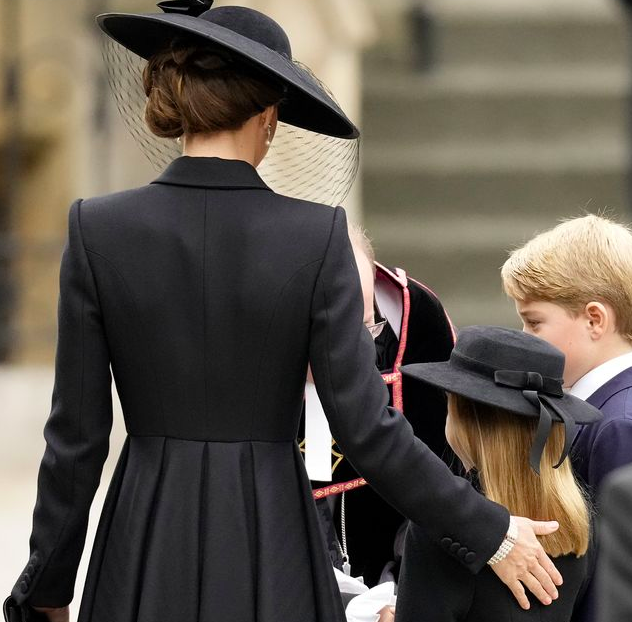 END_OF_DOCUMENT_TOKEN_TO_BE_REPLACED

The 55-year-old goes on to say that taking into account their ages, it wasn't beyond the realms of possibility that there would be fidgeting and eye rolls; chatting and attention-seeking.

"But not a sound. Not as much as a hand misplaced, a grimace or a look of boredom. They looked calm, sombre and dignified — even when observing other members of the Royal Family. Such as when Princess Charlotte looked kindly on at her Uncle Harry or took her cue from her Aunty Sophie, Countess of Wessex."

The TV presenter said, in comparison, many parents could do with taking some notes, and explained that she has written before about her dislike of the way young children of today are so over-stimulated and are required to be kept constantly entertained.

"It’s breeding a nation of spoiled brats whose every whim has to be catered for. Kids are no longer expected to just be bored or to entertain themselves. Parents seem to fear their children’s petulant behaviour and pander to their every desire."

"Not their needs. Their desires. The behaviour of the child more often than not comes down to the parenting."

Jonsson was also quick to admit that she is far from being the perfect parent herself.

"And before you ask, no, I didn’t get it all right. One thing I did get right, I believe, is to make my children understand that the world did not revolve around them at all times,"  she wrote.

Jonsson is mum to son Cameron, 26, with her first husband John Turnball and daughter Bo, 21, with her ex Markus Kempen, who she revealed has recently completed training to become a Norland nanny herself. She also has daughter Martha, 16, with ex-husband Lance Gerrard-Wright and her fourth child, Malcolm, 12, who she shares with Brian Monet.

She went on to explain how she expected them to behave – without 'bribes or promises'.

"There would be times when they would be required to sit quietly, put their needs and demands on the back-burner and behave decently — without bribes or empty promises made in moments of exasperation and desperation," she wrote.

"And this is where Kate and William have clearly done a brilliant job. Granted, they live a life unlike any other citizen of this country but to that end, they’ve needed their children to behave accordingly."

popular
HSE issues advice for parents if their child starts choking
Love Actually star reveals incredibly emotional behind-the-scenes story
S Club 7's Hannah Spearritt and children left homeless after being forced from home before Christmas
Shows like Bluey and Peppa Pig are actually bad for kids, expert warns
Expert says Cocomelon acts "as a drug" to kids' brains
4 ways to fix hard slime with ingredients you probably already have at home
Blake Lively to star in film adaption of It Ends With Us
You may also like
6 days ago
Patient in his 80s killed in Cork hospital ward following attack
1 week ago
Jeremy Clarkson apologises to Meghan Markle over for 'disgraceful' column
3 weeks ago
Ireland set to ban "cruel process" of conversion therapy
3 weeks ago
Details emerge in Bruna Fonseca investigation in Cork
4 weeks ago
Andrew Tate releases statement following Romania arrest
1 month ago
You can now rent Iris's cottage from The Holiday on Airbnb
Next Page