This is fierce clever.

A woman has just revealed a genius hack on TikTok that shows us exactly how not to get sweat marks, and in this heat we need it.

Hannah Dodd, or hdoddles on the app, has shared the hack to make sure you don't get any sweat stains while running around during the heatwave.

Using pantyliners for more than their intended purpose, the TikToker shows her followers how they can be unexpectedly used to keep the sweat to a minimum.

Essentially using them in the armpit part of the t-shirt the same way we would on our underwear, the idea is for this to catch the sweat so our clothes don't have to suffer.

"So basically, you're going to want to turn a t-shirt inside out, make sure you pull the arms out when you do it.

"Then, you're going to want to take two panty liners, I say panty liners and not sanitary towels because I think they stick better, find an inside seam and peel the backing off the pantyliner.

"Then you're going to want to line it up with the inside seam, press it down flat and make sure it's stuck and that it can fold comfortably. 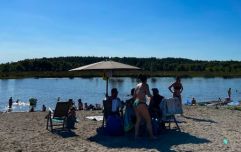 END_OF_DOCUMENT_TOKEN_TO_BE_REPLACED

"Do this on the other side too, it works with light and dark colours and stops you getting sweat patches on your clothes."

Finding the hack from an "age-old housewives trick", she wanted to break the stigma around period products when sharing the hack.

She also noted that she won't wear anything grey or khaki without doing this first, sounds like a must to us.

People hopped to the comments to thank her for the revelation, with one saying: "Loveeee this I wonder if it works on different colour tshirts? Soooo need to try."

Another said: "BRO THANKS.'

While a third added: "if its really hot and im wearing white i might have to try it."

popular
Shock after baby is discovered alone in pram late at night in Dublin
Love Actually star reveals incredibly emotional behind-the-scenes story
HSE issues advice for parents if their child starts choking
S Club 7's Hannah Spearritt and children left homeless after being forced from home before Christmas
What is chroming? Mum issues warning after daughter dies from dangerous trend
4 ways to fix hard slime with ingredients you probably already have at home
Do children belong at weddings? Mum starts heated debate
You may also like
5 months ago
Met Éireann issues high temperature warning for Leinster and Munster
6 months ago
Warning to parents after garden hose leaves baby badly burned
6 months ago
The reason you need to be extra careful if visiting playgrounds this summer
6 months ago
Fur real: Some tips on keeping your precious doggo safe in this heatwave
6 months ago
The hottest temperature in Ireland in the 21st century has been recorded
6 months ago
Nicky Byrne and family evacuated due to wildfires in Portugal
Next Page