Mrs Hinch has been the subject of cruel online trolling with users on social media calling her baby boy 'ugly'.

The cleaning goddess was sent a series of comments on Instagram which included her three-month-old being called 'ugly as f**k'.

This clearly upset the 29-year-old and she took to Instagram Stories to say that she doesn't understand why she's getting so much hate.

Clearly shaken, she said: "Maybe I was stupid to think that no one would be so nasty about a baby, who does that?

"I don't know what I've done so wrong to get stuff like that. I clean my house... and no one else's! I earn some money from Instagram, I buy cleaning products, I clean, I'm not hurting anyone. No one deserves stuff like that.

Speaking about her child, she said: "It's just an innocent little baby, my little boy, I don't know how people like that sleep."

Earlier yesterday she took her baby to get injections and apologised to her fans for not being online. She shared some of the messages she received after posting the Stories and they're absolutely awful. 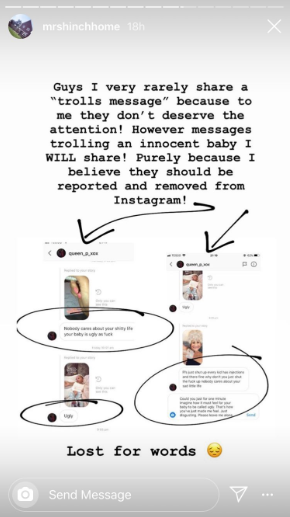 We should all be kinder to each other.