How low can you go?

Vogue Williams recently went on her My Therapist Ghosted Me podcast alongside Joanne McNally to chat about online hate and online trolling and how she deals with it.

The 36-year-old, who is currently pregnant with her third child with husband, Spencer Matthews, revealed that being in the public eye, she is so accustomed to online scrutiny and criticism, that she rarely even bothers looking at comments anymore.

"I just don’t look at the comments anymore because they’re too mean. I don’t do it anymore."

However, while online trolls saying cruel things about her is one thing, Williams admitted that some are even targeting her children, and in particular, her daughter Gigi’s appearance.

"My mom will text me and go, “That’s desperate what they’re saying about your children on there, isn’t it?” and I’m like, “Well, I hadn’t looked, Mom!”.

The model revealed that she finds it utterly bizarre how people literally spend time and effort saying cruel things about her young children, with little Gigi, apparently, facing the most backlash.

"Poor Gigi gets it the worst. (They’re like) “There’s something wrong with that child. She looks funny. Did something happen to her at birth?”‘

Her co-host was clearly horrified at this, asking; "What? How do you not want to turn up to all their houses and petrol bomb them?" 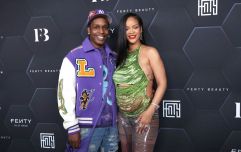 END_OF_DOCUMENT_TOKEN_TO_BE_REPLACED

Williams went on to chat about one particular horrid incident, where a woman – a mother herself – had apparently accidentally e-mailed her with rude comments about Gigi.

"One girl mailed me by accident slagging Gigi off," Vogue revealed.

"She was like two-and-a-half months old. I just emailed her back saying, “This is so f***ing wrong that you’re slagging off a (baby).”’

The mum, apparently, was then mortified about the e-mail mishap.

"She was so apologetic. She was so embarrassed. She was a mum! Like, whatever you get up to in your free time, that’s fine, but that’s so f***ing weird especially coming from a mother."


popular
Opinion: All schools should have generic school uniforms
You can now choose who can and can't see you're online on WhatsApp
Archie Battersbee's mother issues warning about TikTok challenges
Ekin-Su and Davide taking their mums to New York with Love Island winnings
Irish people could be treated to spectacular sights in the sky over the next few nights
London with kids? 5 great places to cool down on a hot summer day
Baby twins die in hot car after dad forgets to drop them to creche
You may also like
3 weeks ago
Alica Silverstone admits she still co-sleeps with her 11-year-old – and why do people care?
3 months ago
Stacey Solomon reveals the painful reason she has been quiet on social media
4 months ago
Kylie Jenner praised for showing off her 'real, raw' postpartum belly
5 months ago
Angela Scanlon announces the birth of her second child
6 months ago
Holly Willoughby uses crystals to help her kids sleep – and she might be on to something
7 months ago
"I would do it once a week" – Gal Gadot on why she loved giving birth
Next Page