WATCH: Netflix is bringing out a documentary on the Watts family murder

I'm someone who watches a lot of true crime shows and there are just some cases that always stick with you.

The Watts family case is one that has always stuck with me.

Maybe it's because I'm a mother but the senseless and brutal deaths of pregnant Shannan Watts and her two daughters at the hands of her husband is a hard one to shake.

Netflix has recently announced the release of a documentary on the Watts case, American Murder: The Family Next Door.

For those not familiar with the Watts case, it began in Frederick, Colorado in 2018 when Shannan and her daughters were reported missing by a close friend and, unfortunately, ended in tragedy.

The case shocked the American public when it was discovered that Chris Watts, who on the surface had it all, became the prime suspect in the murder of his entire family. 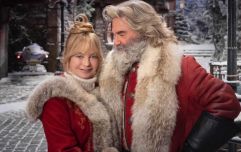 END_OF_DOCUMENT_TOKEN_TO_BE_REPLACED

While the Watts seemed like the perfect family, behind closed doors a secret affair eventually led to the tragic deaths of Shannan (who was pregnant with a baby boy) and her two young daughters Bella (4) and Celeste (3).

While I would recommend watching American Murder: The Family Next Door to any true crime fans I would also warn that it covers domestic violence and the death of children and may not be suitable for everyone.

American Murder: The Family Next Door is available to watch on Netflix from September 30.

Any women who may have been affected by the issues discussed in this documentary can contact Women's Aid at 1800 341 900.


popular
The most stunning baby names inspired by Irish folklore and mythology
"A lot of people do it the other way around" Cameron Diaz talks having a baby at 47
Terrie McEvoy shares first photo of her new home as she moves back to Dublin
People are trying to ban 'Rudolph the red-nosed reindeer'
11 baby names that are perfect for parents who like to stand out
11 super-cute baby girl names your friends will wish they had thought of first
The good old days: 10 granny-inspired baby girl names we think deserve a comeback
You may also like
2 weeks ago
The Haunting of Bly Manor's Flora is actually the voice of Peppa Pig
2 weeks ago
Elf on a Shelf is coming to Netflix because parenting in 2020 just isn't hard enough
1 month ago
First look: Princess Diana and Margaret Thatcher in The Crown season four
1 month ago
'You' season three to resume filming this autumn
1 month ago
A brand new home improvement show lands on Netflix tomorrow – and prepare for an organisation FRENZY
1 month ago
There could be a fourth season of The Fall, according to the creator
Next Page