A woman who named her baby 'Atom Bomb' has been arrested for transporting methamphetamine.

Jessica Killian gave birth to her son on New Year's Day in the front seat of a car when she was travelling to the hospital.

The Cleveland mother decided to call her son 'Atom Bomb' because when he was being delivered, "he came in like an A-Bomb."

Springfield News reports that Jessica has since been arrested for transporting meth in the same vehicle that she gave birth to her son in.

The mother-of-four had baggies and scales inside of the car, which police believe she was using to manufacture drugs.

She was charged with drug trafficking, possession with the intent to manufacture, sell and deliver drugs, and a misdemeanour count of possession of drug paraphernalia three weeks after giving birth.

Police said Jessica Killian, 32, had 36 grams of meth inside her 2011 Chevrolet Cruze, which she not only used to run her drug operation, but to give birth to her son, Atom Bomb earlier this month. https://t.co/OqsZh4LvAb 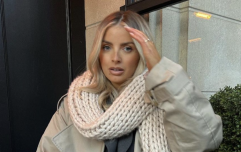 END_OF_DOCUMENT_TOKEN_TO_BE_REPLACED

Following his unconventional birth, Atom Bomb's umbilical cord was tied using a shoestring until both he and his mother could make it to the hospital.

Jessica said afterwards that she was glad her son was born in the front seat of her boyfriend's car while her five-year-old watched.

"He is perfect to have been born in a car, I don't know,” Killian said. “I guess you would think something would have went wrong, but it didn't."

Atom Bomb is now in the custody of a family member.


popular
Tom Cruise slated for "inappropriate" behaviour around Kate Middleton
What exactly is monkeypox and is it dangerous?
Rihanna fans slam Chris Brown for commenting on her baby news
10 hotels with self catering that are perfect for a family staycation
Gardaí investigating attempted abduction of 7-year-old boy
The Toy Show Musical looking for a young girl to star in lead role
Expert says Cocomelon acts "as a drug" to kids' brains
You may also like
1 week ago
A TikTok-er showed the size of an epidural needle, and yep, it's huge
2 weeks ago
Real, raw, amazing: Why I think we need to talk more about positive birth experiences
1 month ago
Mum gives birth to baby in toilet after thinking she just "had to poo"
1 month ago
Woman reveals why she won't call her husband when she goes into labour
1 month ago
I want my mum with me when I give birth, but my partner won't allow it
2 months ago
Men should never watch a woman give birth, this doctor argues
Next Page