Alica Silverstone admits she still co-sleeps with her 11-year-old – and why do people care?

When I first became a mum, everything was so new and I remember finding it pretty overwhelming.

I was so terrified of making any mistakes, and could only really relax when I had my little girl in my arms or right next to me.

This was also the case for nighttime.

When she was born, my husband was doing a master's degree abroad, and so for a long time, it was just us two most of the time. And so as I was breastfeeding, I would bring her into bed with me – and we both slept – hah! – like babies.

When my second baby came along, I had done more research on co-sleeping and the amazing benefits of what some referred to as 'attachment' parenting. And so he slept most nights right next to me too. Often, with his sister in there too, curled up at the bottom of the bed. 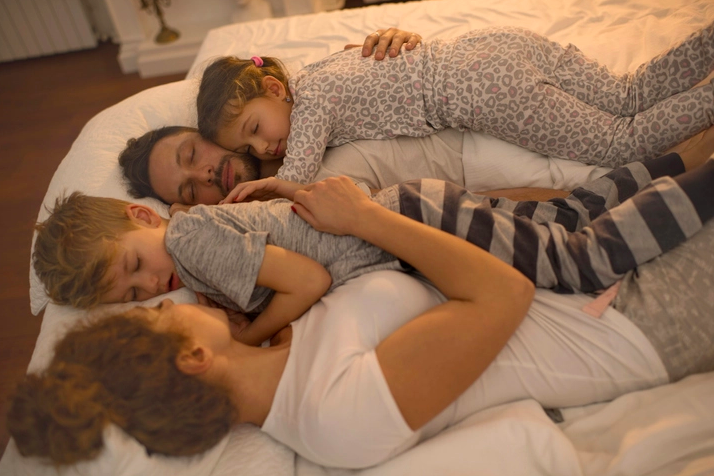 And even still to this day, much as they have their own beds, they still come in for snuggles often. We curl up in the big bed and read – we are currently working our way through Harry Potter. We chat about our days. We giggle and laugh and share – and I know I will forever cherish these moments and am so grateful I let my heart decide what felt right for my family – because for us, this was the right way.

And for others, other bedtime routines and sleep arrangements are right.

Because isnt't that the thing? Our parenting journeys are all different, and what works for some, might not for others – and honestly, why do we even care how other people raise their children or live their lives?

Actress Alicia Silverstone recently spoke about how she still co-sleeps with her 11-year-old son, Bear – and needless to say, people had lots of opinions.

The 45-year-old appeared on The Ellen Fisher Podcast earlier this week to talk about her life as a vegan and what goes into raising healthy kids. When the subject of co-sleeping came up, Silverstone revealed that she's always slept with her son, Bear, 11, whom she shares with ex-husband Christopher Jarecki.

"Bear and I still sleep together," she said, noting that she is just "following nature" with her parenting style.

"If you were in any kind of wild setting where there are animals ... if you put your baby over there," she said, pointing away from herself, "your baby is going to get eaten. It's not ideal for the baby to be over there."

Later in the discussion, Silverstone praised motherhood as "the most precious, most unbelievable experience in this world," adding, "For me, it's so divine."

The internet being the internet, many were quick to take to social media to slam the Clueless alumn for her controversial statements.

"She won't let this kid even have a CHANCE of not being clowned on by his peers," one person tweeted.

Another added: "Poor kid, she's ruining him and making it hard for him to ever find the right women," while a third simply called the arrangement "creepy."

However, others stood up for Silverstone, and said it really is up to each parents how they raise their children.

"Our 12-year-old sleeps with her dad and I...guess what? I don't care if you or society thinks it's strange...it works for us and our daughter is thriving! #normalparents," someone else said on Instagram.

Another user, meanwhile, chimed in: "I don't see the issue?? I slept with my mom until I was 12," they shared.

popular
Bachelor Nation star Sarah Herron's baby passes away shortly after birth
Molly Mae fans are shocked after finding out how much Bambi's crib cost
Tommy Fury responds to Jake Paul ruining his baby news
Expert says Cocomelon acts "as a drug" to kids' brains
Man charged with the murder of pregnant Natalie McNally
Dad asks public to forgive his wife after she killed their three children
Molly Mae says becoming a mum is the best thing that ever happened to her
You may also like
4 weeks ago
Molly Mae reveals what she'll miss most about pregnancy
8 months ago
Rihanna has reportedly given birth to her first child
9 months ago
Stacey Solomon reveals the painful reason she has been quiet on social media
10 months ago
Kylie Jenner praised for showing off her 'real, raw' postpartum belly
10 months ago
Vogue William says trolls are posting horrific things about her daughter online
11 months ago
Angela Scanlon announces the birth of her second child
Next Page