Does having kids make you unhappy? The Germans think it does

Having a first child may turn out to be worse than divorce, unemployment or even the death of a partner – that’s according to a study of German parents.

The purpose of the study was to find out why so many couples state that they plan to have two children but then go on to have just one. New parents who had been childless in earlier rounds of the survey were asked to rate their general satisfaction with life on a scale of one to ten, and this was then compared to their previous responses. About 30 per cent of respondents were as happy or happier, but the majority were less satisfied, and in some cases, quite significant drops were recorded.

So does this mean that having children make us unhappy?

I guess at the outset, it depends on when the question is asked. If I’m in the middle of refereeing an almighty row on a wet Tuesday afternoon, and a researcher rings my doorbell to ask me if I’m happy, my answer might not be very positive. It might be an expletive. But call back an hour later, when we’re all snuggled up on the couch, and the answer might be very different. And I don’t even have a newborn. I’m not sure what my sleep-deprived answer would have been eight years ago, when I was a new first-time mum.

But really, are kids supposed to make us happy? I’m not sure that’s their job. And I don’t know that people decide to start families in order to be happier. I know I went into it with my eyes (half) open – I knew it would be a huge change, I knew my time would never be fully my own again, and I knew that it would be tough. I went into it because I was pretty sure I wanted a family but I didn’t expect my life to be immediately “happier” as a result.

In fact, sometimes being a parent brings out the worst in me. Like when I roar at them for a minor infraction because it’s the eighty-fifth minor infraction of the day. Or when they come in on a Saturday morning and I beg them to go back to bed instead of pulling them in beside me. Or when I rush through the bedtime stories and hush their pleas for one more page.

But sometimes parenting brings out the best in me too.

I don’t sweat the small stuff the way I used to - maybe because I don’t have time to, or perhaps because I have more perspective than before. This was most noticeable when I went back to work after my first maternity leave - the people and projects and meetings that used to drive me crazy just couldn’t dent me anymore. Work was work, but as soon as I walked out the door each evening, it was gone from my mind – no more worrying about what someone had said at a meeting, or the tone of an email. So yes, on the work front, I was happier after kids.

I’m more organised, I fit more in my day, and I make the most of every hour. That’s not to say that people without children aren’t busy – I just know that I personally didn’t have as full a day before kids. Being busy doesn’t necessarily mean being happy, but for me, the more I have to do (and as long as it doesn’t tip over into overwhelming negative stress) the happier I am. 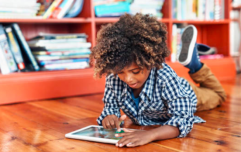 END_OF_DOCUMENT_TOKEN_TO_BE_REPLACED

I’m less selfish than I used to be – I (mostly) don’t resent that most of what I do is ultimately for them, or that I only have a tiny amount of me-time in any given twenty-four hours (except when they’re eating into it by begging for more stories…)

I’m more engaged in the nice stuff than I used to be – the kind of things that used to leave me somewhat cynically on the sidelines now suck me in, because they love them – like children’s birthday parties and kids’ TV and Mother’s Day.

And I’ve learned to find great pleasure in small things – like an ice-cream on the pier or a hot chocolate on a cold night or a little girl cuddle too early on a weekend morning. I now know that my favourite thing to do on a Saturday night is to play “doctors and hairdressers” on the bedroom floor when they’re all in pyjamas. And my next favourite thing is a glass of wine when they’re all finally asleep – small pleasures.

If I’d been surveyed for the German study one year into parenting, I don’t know what my answer would have been. It’s entirely possible that I’d show up as less satisfied with life than before, especially if I’d had no sleep or just been puked on or couldn’t stop the baby crying, or all of the above.

And maybe the computer would churn me out as someone for whom having kids caused dissatisfaction and unhappiness. But it wouldn’t be true. My kids aren’t supposed to make me happy – that’s not their job. I’m supposed to make them happy, and when I’m trying to do that, I become a better version of myself. I’d rate that as happiness.


popular
A mini heatwave could be coming our way in September
Gardaí begin nationwide search for missing teenage girls Charli & Ruby McGlynn
Here's where you can find school uniforms that will stand the test of time
Vogue Williams slams man who refused to swap seats with her on plane
Expert says Cocomelon acts "as a drug" to kids' brains
Mum issues warning to parents over frightening Cocomelon video
Mum charged with murder after allegedly leaving baby in hot car
You may also like
18 hours ago
Written in the stars -What does your zodiac sign say about your parenting?
1 week ago
How soon is too soon to leave your new baby for the first time?
1 week ago
Mum posts online asking when exactly does parenting get easier
1 week ago
If you could have a "parenting do-over", what would you change?
2 weeks ago
These are things police officers wish you’d teach your kids to keep them safe
2 weeks ago
I tried a viral 5-second trick that promised to make me a happier, calmer parent
Next Page