'It’s not what she IS, it’s what she HAS.' - Mum's post on Down Syndrome goes viral

A French journalist has written an open letter to the public, asking people to think before asking a clumsy or insensitive question about her baby daughter, who has Down Syndrome.

Caroline Boudet posted the heartfelt plea on Facebook after becoming frustrated by the ill-informed comments of strangers.

"Here is my baby girl, Louise." begins the post, which has since been shared more than 25,000 times. "She is four months old, has two legs two arms, and one extra chromosome." 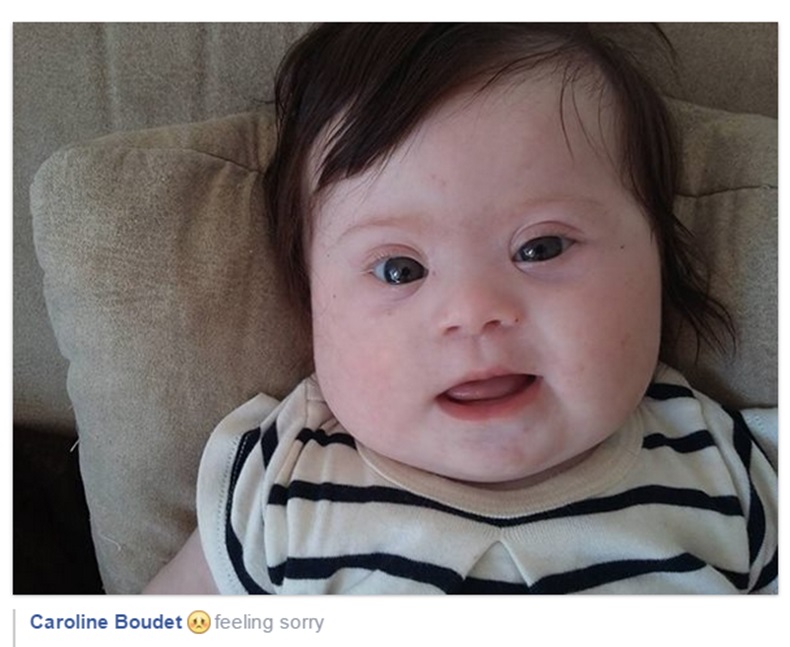 The piece, translated into English, continues: ‘Please, when you meet a Louise, do not ask her mother, “Was it not detected during pregnancy?” Either it was, and the parents took the decision to keep the baby. Or it wasn’t and the surprise was great enough that there’s no need to revisit it. Bear in mind that mothers have a tendency to feel guilty about each and every thing, so a surprising extra chromosome… I don’t need to tell you.

Don’t tell her mother, “It’s your baby no matter what.” No. It’s my baby, period. Plus: ‘nomatterwhat’ is quite an ugly name; I’d rather call her Louise.

Don’t tell her mother, “As she is a Down’s baby, she will… etc.” No. She is a 4-month-old baby who happens to have Down’s Syndrome. It’s not what she IS, it’s what she HAS. You wouldn’t say “she’s a cancer baby.”

Don’t say, “They’re like this, they’re like that.” “They” all have their features, their character, their own tastes, their life. “They” are as different between them as you are from you neighbour.

I know that if you haven’t experienced it, you don’t think about it, but words do matter. They can comfort and they can hurt. So just give it a thought, especially if you’re a doctor or nurse of any kind.

I usually don’t make my status ‘public’ on Facebook, but this one will be. You can read it and share it as you want. Because each year (in France) there are 500 new ‘mothers of Louise’ who can have a day ruined by those kind of words. I know it’s not meant to hurt. But you just need to know.’

The piece has won praise from parents all over the world, many of whom identify with Caroline's experience.

Have you had a frustrating or insensitive comment from a stranger regarding your child? How did it make you feel? Tell us your story, email katie.mythen@herfamily.ie.


popular
New dad called 'demanding' over list of guidelines to visit newborn son
6 fun things to do in Dublin on your next family day out
"No co-sleeping at all" – new safe sleeping guidelines for babies states
Winning (weird) food combos that pregnancy cravings helped me discover
Shows like Bluey and Peppa Pig are actually bad for kids, expert warns
Some parents were disturbed to discover that LOL Surprise Dolls have genitals
10 Unpronounceable Irish Baby Names That'll Wreck Your Kid's Head For Life