Mums, this little girl’s request from the Tooth Fairy is priceless

Kristen Hewitt has revealed what her daughter wanted from the Tooth Fairy and it will make you chuckle.

Don’t all parents dread the day the existence of Santa, the Easter Bunny and the Tooth Fairy are called into question? When the magic begins to wear off and the questioning starts it can be a little overwhelming.

Of course, everyone is different but for many parents, it’s nice to keep the mystery and excitement alive before breaking the news.

Mums, you might not expect to laugh when the doubt creeps in but television writer and producer and mum of two, Kristen Hewitt, was doing just that when nine-year-old Lila and six-year-old Emy colluded and hatched a plan to get the Tooth Fairy to reveal her true identity.

Yep, clever Lila called her mum’s ultimate bluff and asked the Tooth Fairy for a selfie!

The mini tech wizard even thought to include her iPad password to enable the Tooth Fairy to fulfil her request.

Oh the things this generation of mums has to deal with!

We love Lila’s attention to detail as she even transcribed her message out a second time, in case the Tooth Fairy couldn’t read cursive.

“My husband and I talked about me putting on a wig, wings, and adding a bright light behind me to actually take a selfie. And we also looked at tooth fairy apps”. 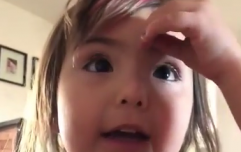 END_OF_DOCUMENT_TOKEN_TO_BE_REPLACED

In the end, Kristen penned a simple note from the Tooth fairy explaining that she would “lose her powers” if she were seen and asked “What’s an iPad?” before signing off as “Tabitha” the Tooth Fairy (everyone loves a bit of alliteration).

Kristen admitted that she “felt immense guilt" about lying to her children about these mythical creatures, but went on to say that they will "figure it out soon.”

Do you sympathise with this sentiment mums or do you think childhood is about these whimsical experiences that shouldn’t be seen as lies?

If your child is currently losing their baby teeth, here is everything the Tooth Fairy wants you to know about it.


popular
Jacques O'Neill speaks out about Paige and Adam's relationship
Gardaí are appealing for assistance in tracing 17 year old missing since July
Planning your next getaway? Here are 6 fun family activities to try this summer
Barry Keoghan announces the name of his baby boy
Musings: I think 'Lawnmower' parenting is damaging for children
4-year-old girl killed in house explosion in London, police confirm
Child killed in house explosion in London

You may also like
3 years ago
Video of little boy saying 'moo' in Welsh and Irish accents is just too adorable
3 years ago
Scottish parent points out 'problem' with child's sequin top and it's hilarious
3 years ago
This little Irish girl swearing about her sore fingers is absolutely hilarious
5 years ago
These Kids Talking About Marriage Is The Cutest Thing EVER
5 years ago
Kids are Naturally Little Comedians: THIS Is The Cutest Thing You’ll Watch Today
6 years ago
10 April Fools Pranks to Get Your Kids Back for Never Going to Sleep. Ever.
Next Page