'Parenting is hard, but lashing out is not the answer'

Smacking children is in the news again.

The Government wants the defence of "reasonable chastisement" removed from common law, which would mean parents will effectively be banned from smacking their children.

This is in response to a Council of Europe ruling that “reasonable chastisement” is a violation of children’s rights. It will bring us in line with other European countries who have already banned smacking, and answer longstanding calls from children’s groups like the ISPCC, who released a statement saying:

"It is clear that physical punishment of children is a human rights issue. We have - through our history - reformed laws which allowed masters beat their servants and husbands beat their wives. Any society that is serious about preventing child abuse and discouraging violence must recognise that a legal ban on physical punishment is required.”

However, online polls and texts to radio programs this week suggest that many, many Irish people feel the government shouldn’t ban smacking – that it’s a legitimate and effective form of discipline.

There’s missing logic here. If we smack children because they don’t do what we ask them to do, we’re simply teaching them that hitting is the correct response to not getting your own way.

We’re saying, “I’m angry or unhappy with you so I’m going to react by hitting.” We’re telling them through our actions that it’s okay to hit siblings who take their toys or classmates who call them names. We’re showing them that when they grow up, hitting other adults is acceptable, and that it’s fine to hit their own future children.

A 2010 study from Tulane University found that children who were spanked frequently at the age of three were much more likely to be aggressive when they were five, even after taking in other factors. Signs of aggression found in the five-year-olds who had been smacked included arguing, screaming, cruelty, bullying, fighting, and threatening others.

Similarly, a longitudinal study published in 2013 found that spanking five-year-olds could have a detrimental effect on behaviour and cognitive development at age nine. 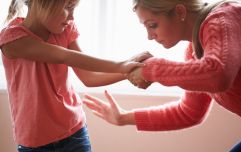 END_OF_DOCUMENT_TOKEN_TO_BE_REPLACED

We wouldn’t hit our neighbours, or people who work for us, or our pet dogs. Husbands are not allowed to hit wives. So why then is it acceptable to hit a small child?

Parenting is hard. There are times when every parent feels angry and frustrated. Parents need support and understanding and empathy too, but making a concrete decision not to smack is a starting point, and makes it easier to take deep breaths and avoid lashing out.

When this debate comes up, parents will often defend smacking their kids by saying, “I was smacked as a child and it never did me any harm.”

And that’s just it – it did do harm. Because that person has grown up to be an adult who believes it’s acceptable to hit another human being – specifically one much smaller and much more vulnerable. A child who should be able to trust that the adults in her life will not physically harm her.

So while legislation can’t protect children so easily from what goes on behind closed doors, it can send a strong message to those who see hitting as an acceptable form of discipline. If it’s illegal, and huge numbers of people around the country accept it as illegal, perhaps for proponents, it will be worth pausing and thinking about it.

Physical punishment doesn’t work long-term; it creates fear and distrust, low self-esteem and a cycle of hitting that runs for generations. Finding positive ways to discipline children might be a more challenging path in the short-term, but if it maintains trust, keeps children safe and secure and builds future adults who don’t see violence as a solution to life’s problems, it has to be worth the effort.


popular
Barry Keoghan announces the name of his baby boy
Ashling Murphy had so much more to give, says heartbroken parents
4-year-old girl killed in Sligo caravan park named locally
This mum's post about dying to send her kids back to school is too funny
Musings: I think 'Lawnmower' parenting is damaging for children
Planning your next getaway? Here are 6 fun family activities to try this summer
Lauren Goodger assaulted and taken to hospital after daughter's funeral
You may also like
3 years ago
Countries with smacking bans have less youth violence, claims research
4 years ago
'I saw a mum hit her child': Is it ever ok to intervene?
5 years ago
The negative effects of smacking young children last for years
5 years ago
Children who are smacked are more likely to have mental health issues
5 years ago
Slapping: If You Think It "Did You No Harm" You May Need To See This
6 years ago
Peter Andre Speaks Out About The Issue of Smacking Children
Next Page