This week we reported on a fascinating new study that revealed how delaying the age your kids start school could boost their grades significantly... right up until they turn eleven.

Scientists have discovered that keeping kids at home for an extra year can dramatically improve their self control and concentration, reducing inattention in 11-year-olds by an incredible 73 per cent.

Naturally, HerFamily.ie readers had a lot to say on the matter. Here's some of the key arguments we heard from you this week:

"My boys were four and in hindsight I feel I should have waited. They weren't mature enough. I was afraid that if they spent another year in Montessori they'd get bored and act up."

"I was five in the May before I started in September. So when I was doing the Leaving Cert I'd turned 19 a month beforehand and felt old doing it!"

"My son started school after turning 4 and he is in no way any different to other children who have started at a later age.. He is thriving in his subjects and I have had no problems."

"My son was four in February and I sent him to school that September, he was well able for it. He is now in Leaving Cert year and will be just 17 when he is doing his exams. And I now wonder if I should have kept him back a year as he will be only 17 when he is going to college. He is very bright and well adjusted but I still feel he is very young to be going to college." 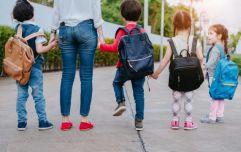 END_OF_DOCUMENT_TOKEN_TO_BE_REPLACED

"It depends on the child. My son hated preschool as he felt like he was stuck with "babies" - he started school just after he turned four, got on great. You know your child don't let others influence your decision."

"They're only babies for so short a while, I've always thought 'you know what, they'll be in 'school' long enough'."

"I started my daughter at four years and six months and although she was well ready academically she struggled socially - she's in second now and the youngest in her class. I really regret it. I don't think anyone ever regrets sending them older."

"I think boys need that extra time. Girls seem to be ready for school earlier."

"I really think it depends on the child, some children at four are very grown up for their age and ready to start school and keen to learn more, and some parents use school to ease their day care costs, some people literally can't afford to wait until their children are nearly six to get help with the childcare costs.
While other children at four are still very young and too easily distracted to sit at school. You know your own child and what's best for them. In some countries children don't start school until they are eight.

What age were your kids when they started school? Let us know on Twitter @HerFamilydotie.


popular
Say hello to the €40 M&S dress everyone needs in their spring wardrobe
We are absolutely loving this gorgeous €10 khaki mini dress from Penneys
Brides-to-be! The €50 Zara dress that's perfect for day two of a summer wedding
Grandparents build magical Harry Potter-themed playhouse for their granddaughter and WOW
We need to talk about the unreal leopard dress that's just €9.99 in the Zara sale
The gorgeous Penneys trousers that are a must-have for your workwear wardrobe
The floral River Island dress that will instantly update your wardrobe for spring

You may also like
1 week ago
Sitting in a classroom all day is really bad for our children's health – and a study just proved it
4 weeks ago
The handy little gadget that might help your child learn how to write better
1 month ago
Don't ask your kids if they've had a good day at school (but ask this instead)
1 month ago
Apparently, getting your kids up and ready for school is equivalent to an extra day's work
1 month ago
One teacher's tip for finding out which children are being left out is sure to resonate with parents
2 months ago
Four Christmas gift ideas your child's teacher would actually really like
Next Page