And his name is definitely unique.

Sex and the City's Chris Noth and his wife Tara have welcomed their second child together.

The actor shared the news earlier this week, with a sweet post on Instagram that showed the newborn curled up under a blanket.

In the caption for the photo, he also confirmed the baby boy's name: Keats.

"Down from the heavens comes our second son- Keats," he wrote in the caption. "'A thing of beauty is a joy forever'."

Noth's former Sex and the City co-stars were among the people sending well-wishes to the now-parents-of-two.

"Oh my goodness ! He is so perfect and beautiful ! Congratulations to you all," Kristen Davis wrote. 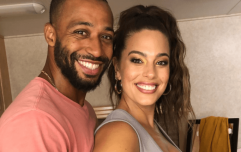 END_OF_DOCUMENT_TOKEN_TO_BE_REPLACED

"No way!!!!!!!! Wow!!!! How thrilling. Hoping mother and Keats all well and sending every single ounce of love. To the whole gorgeous family," Sarah Jessica Parker added.

The 65-year-old and his wife, Tara Wilson, confirmed in September last year that they were expecting their second child.

"Orion is getting a brother- I better get my ass in shape," the actor wrote alongside a photo of his wife, Tara.


popular
Get ready: The top 12 toys expected to top every child's wish-list this Christmas
Midwife writes honest post about what it's like being a midwife during pandemic
The latest 'mom and mini-me' outfits at H&M are so flipping adorable
Joaquin Phoenix and Rooney Mara give birth to baby boy with very sentimental name
Caroline Foran posted about using a night nurse but what is it that night nurses do?
Safari Quest allows you to explore new worlds all from the safety of your car
5 great pumpkin patches around Ireland to bring the kids to this month
You may also like
6 months ago
Dancing on Ice's Ashley Banjo and his wife Francesca have welcomed their second child
6 months ago
Deliciously Ella's Ella Mills reveals she is expecting her second child
6 months ago
Jenna Dewan and Steve Kazee have welcomed their first child together
6 months ago
Katy Perry and Orlando Bloom are expecting their first child together
7 months ago
'My darling girl has arrived': Lydia Bright has welcomed her first child
7 months ago
Ben Foden and his wife Jackie are 'expecting their first child together'
Next Page