It's enough to make you broody...

Stacey Solomon has finally unveiled her newborn to the world.

The proud mum shared the first proper photo of the son she and Joe Swash welcomed last month - and he is divine.

She also said that she hadn't wanted to share his name until his actual due date today.

"Rex because our boys think he sounds like a T-Rex. Francis is Joe’s Nanna’s name and Toby is my Nanna’s name.

"Its taken us this long to announce the name because for some strange, probably hormone and post birth related, reason I didn’t want to do it until his official due date." 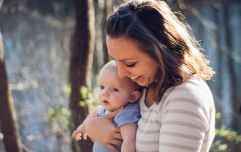 This is why mums hold their babies on the left, according to science

END_OF_DOCUMENT_TOKEN_TO_BE_REPLACED

The Loose Women presenter, who has opted to keep the name of her son secret since his birth, shared a short video of herself and the baby to Instagram Stories this week.

In the clip, which she quickly deleted, she could be vaguely heard calling him 'Rex' and 'Rexy'.

popular
Childcare fees to be reduced by up to €170 per month
Budget 2023: Parents will not have to pay for primary school books from next year
Parents told to prepare for two-year-long creche waiting lists
Coronation Street star Lucy Fallon pregnant after miscarriage heartache
Smyths issues warning to parents ahead of Christmas
Breaking is the haunting novel parents need to read this October
Shows like Bluey and Peppa Pig are actually bad for kids, expert warns
You may also like
1 day ago
Hilaria and Alec Baldwin welcome baby #7 together: 'We are overjoyed'
5 days ago
RTÉ's Caitriona Perry announces the birth of her second child
1 week ago
Nick Cannon becomes a dad for the ninth time
1 month ago
Jenny McCarthy and Martin King welcome another grandchild
1 month ago
Michael Buble and wife Luisana Lopilato welcome their fourth child
1 month ago
John McAreavey reveals baby number two is on the way
Next Page