When Terri Day discovered her son had behaved abominably towards another student at school, she took to Facebook to publicly remind him that his actions were unacceptable.

When the post went viral however, Terri found herself defending her own actions against people who feel her decision to shame her son was too heavy handed.

The story started when Terry's 12-year-old stamped on the foot of a girl in his glass, braking the heel of her new shoes.

“If you so much as breath in her or anyone's direction in a bullying manner I will personally hand you over to their parents for every demeaning chore they see fit for as long as they do.

“Kiss goodbye to your birthday money as you will be buying the girl a new pair of shoes and a bunch of flowers!”

While many parents congratulated Terri for coming down hard on her child's bullying behaviour, others felt she could have kept the punishment private.

Alison Kyle said: "Why extend the humiliation? Your poor son. This will haunt him forever. A mistake at 12, online now for all to see."

Terri says she shared the status update to remind her son that actions have consequences: "He is not big, clever, hard or funny," she said "he's a 12 year old boy answerable to his mam." 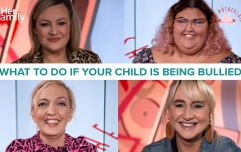 The Mothership: What to do if your child is being bullied

END_OF_DOCUMENT_TOKEN_TO_BE_REPLACED

She added: "...my so called embarrassing him online is quite frankly nothing in comparison to the humiliation that little girl had to face walking round with a broken shoe and red eyes from crying when she is new."

The post has since been removed but not before it was shared almost 60,000 times.

What do you think, was this mum too heavy handed with her son? Let us know on Twitter @HerFamilydotie.

popular
Emma Pattison made distressed call to sister before murder-suicide
Dunnes Stores launches stunning collection of Communion dresses
Siblings kidnapped in March 2022 have been found alive
Expert says Cocomelon acts "as a drug" to kids' brains
Vogue Williams opens up about her divorce from Brian McFadden
Shows like Bluey and Peppa Pig are actually bad for kids, expert warns
Stacey Solomon hints at baby girl's name as due date nears
You may also like
5 days ago
'He's a changed man': Woman marries her 'high school bully'
8 months ago
Young boy loses his fingers in bullying incident at Welsh school
9 months ago
6-year-old boy left "scarred for life" after bullies allegedly set him on fire in US
10 months ago
Teacher uses two apples to show her students the effects of bullying
1 year ago
France approves proposed law to criminalise school bullying which could see bullies jailed
1 year ago
Mum shocked to find hickeys on bullied 6-year-old's neck after school
Next Page