Toddler Tantrums: How You React Affects How They Behave

When a viral video of two-year-old Piper having a tantrum divided opinion on the HerFamily.ie Facebook page and Youtube, we thought we'd get the experts to weigh in. Here Child Psychologist David Carey offers his thoughts on the tantrum... and what the child's dad could have done to prevent it.

Watching this video of two-year-old Piper throwing a Guinness Book of Records-worthy tantrum illustrates everything you need to know about what to do and what not to do as a parent. We all know that two-year-olds throw tantrums. What most of us don’t know is why they do it.

There are several possible answers, each one will lead us to a different form of productive interaction with the child. Let’s take them one at a time and then discuss the role of the father in the Piper video.

Some tantrums are an attempt on the part of the child to control the parents. It is natural for children to respond positively (most of the time) to parental requests. It is equally natural for children to resist parental requests (or demands) and prove they cannot be controlled. Children who exhibit this particular tantrum-throwing behaviour are usually well above the age of three. Two-year-olds don’t usually have enough cognitive development to willfully want to overpower their parents. Most tantrums in two-year-olds are a result of undeveloped brain circuits that make them more emotional than reasonable. We will come back to little Piper in a while because she is throwing an age-appropriate tantrum that isn’t an attempt to overpower anyone. She is simply overwhelmed with emotion, maybe overtired and perhaps confused about the arrival of a new baby, all normal, expected two-year-old behaviour.

Temperament is the genetic part of our personality, something we are born with. All children are born with different temperaments. Some children are easy to rear, some are difficult. Children who are cuddly, calm, rhythmic (predictable patterns of eating, sleeping and waking), not easily startled and easy to soothe have a temperament that makes them easy to love and easy to parent. Children born colicky, irritable, unusually easily startled, hard to sooth, difficult to cuddle are hard to discipline and hard to manage. These children often throw tantrums because they have low frustration tolerance and an inability to manage anger. This is largely a dynamic of genetics and the inborn personality trait of the child.

So powerful is the need for parental attention that nothing is worse for a child than to not be noticed. The drive for parental attention is overwhelming and cannot be resisted in some children. They would rather be chastised and punished than be ignored. The need for parental attention can be put to incredibly powerful use by parents. In the old days, my parent's generation advised: “Catch them being good.” In other words, reward with praise, tenderness and love those behaviours you want to see more of in your child. Ignore the behaviours you want to see less of (when possible). It's the simple law of behaviour modification: all behaviour increases in frequency when it is rewarded. Children are rewarded by parental attention even if it is negative attention and their behaviour increases as a result. Watch this brilliant video of this dynamic and see for yourself... 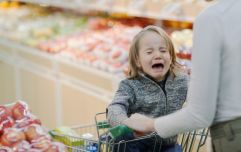 7 parents share the weirdest thing their child has cried about

END_OF_DOCUMENT_TOKEN_TO_BE_REPLACED

The ability to regulate emotions such as anger and frustration is medicated by the brain stem. It is one of the most important functions of the brain. If a child is poorly self-regulated they will have difficulty making friends, listening to adult instructions and following even simple rules and regulations. Self-regulation difficulties often arise after birth trauma, serious illness, separation from the attachment figure, head injury or developmental disabilities such as autism of ADHD.

Piper is two years-of-age. Her brain is not fully developed (in fact it won’t be fully mature until she is in her mid-twenties). The circuits in her brain that help her manage emotions, think through situations and control anger aren’t working yet. This tantrum is not a result of a need to control her parents, a difficult temperament, attention seeking (although there is an element of that present in her tantrum) or self-regulation deficits. In other words she is a normal two-year-old.

Her father uses far too many words. He unwittingly reinforces her tantrum by constantly asking her to come and see the new arrival. Even when she calms down a bit he continues to ask her what she has resolutely refused to do and she tantrums again.

This is an example of useless parental intervention. It is obvious in the first minute that it isn’t working but the dad seems blind to this fact. He uses the same intervention over and over again with the same hopeless result. If he had simply walked away and left her she would quickly have followed him. If you want to see the best example of this see the video above.

There is a lot to be learned about discipline and reinforcement by watching Piper and her father. Review the video again in light of these observations.

David Carey is our resident child psychologist. David has over 25 years experience in both clinical and educational settings. The author of several books, he's also a regular contributor to the Moncrieff show on Newstalk 106-108FM.


popular
"She is too young": Kourtney Kardashian mum-shamed over daughter's latest TikTok
Brother of Amber Gibson charged in connection with her death
Here are the final post dates for Christmas 2021
Tánaiste Leo Varadkar reassures kids that Santa will visit Ireland this Christmas
Father and girlfriend found guilty over death of 6-year-old Arthur Labinjo-Hughes
My father-in-law revealed I suffered a miscarriage on Facebook- how will I ever forgive him?
"He was my best friend": Mother of Arthur Labinjo-Hughes pays tribute to her son
You may also like
2 years ago
Mum's powerful post about a toddler's tantrum goes viral for a super important reason
2 years ago
5 things every mum of a LOUD child will know to be entirely true
2 years ago
Mum-of-seven stuns This Morning viewers after claiming none of her kids have had a tantrum
3 years ago
FBI negotiator reveals how to make your kids listen to you
3 years ago
This baby's tantrum had a very unlikely and hilarious outcome
4 years ago
Twitter user witnesses best temper tantrum of all time
Next Page