A 61-year-old woman has given birth to her own granddaughter after acting as a surrogate for her son.

Cecile Eledge said that if she was healthy enough to undergo IVF treatment so her son Matthew and his partner Elliot could become parents, she wanted to.

After doctors deemed that she was fit to carry a child, the Nebraskan woman was implanted with several fertilised eggs, donated by Elliot's sister.

She became pregnant on the first try and gave birth to baby Uma, her own granddaughter, on March 25.

Buzzfeed News reports that Cecile experienced morning sickness and some issues with blood pressure, but that she was ultimately able to carry the baby for seven and a half months no problem, eventually giving birth naturally.

Cecile said that although she had been warned about the risks of pregnancy in later life, she found the experience easy enough. Or, indeed, even easier than giving birth to her own children.

"I worked out, I walked, I was physically active. And actually, it was almost easier," she said.

"Because I'm older, my diet's been easier to control, and I didn't have the responsibility of other children. Just this pregnancy."

Matthew said that since the birth of his daughter, one of his friends has been freezing her own breastmilk for baby Uma.

"We love women," he said. "We think women should rule the world."

"Elliot’s sister donated her eggs, my mom carried her, and we have this dear beautiful friend giving her this nourishment.

"Our daughter, Uma, gets to be surrounded by all these smart, beautiful, compassionate women.”

However, despite the closeness of his new family, Matthew said that Nebraskan law does not allow for Elliot's name to be on the birth certificate.

Rather, he and his mother are Uma's legal parents. 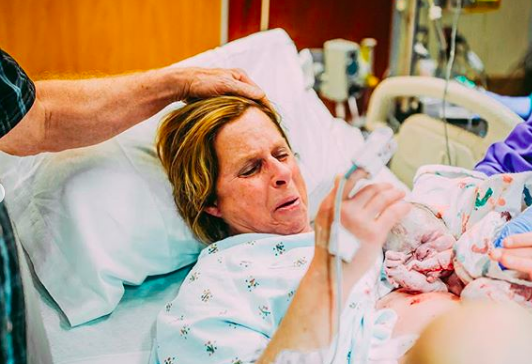 “It’s kind of embarrassing,” he said.

"Nebraska requires the sperm donor to be the father and the person who delivers the baby to be the ‘mother,’ even if she’s not biologically related to the child. This looks really creepy for us.

"Let’s just say we will NOT be framing and hanging up Uma’s birth certificate."

The teacher said that his partner will now go through the adoption process to ensure he has legal rights as a father.

You can read Matthew and Cecile's story in full here.


popular
"Don't you want to feel like part of the family?" Spencer Matthews wants Vogue to take his last name
Sligo teacher creates animated video series for Junior Cert revision
10 great (and affordable) buys to give your home office a bit of a facelift
5 amazing Irish baby clothing brands that you probably haven't heard of yet
Positive parenting: 11 little things that mean the world to kids
Mother-in-law wants her grandkids to call her 'mommy' and there's uproar
CJ Fallon and Edco now providing free access to their books until end of term
You may also like
1 hour ago
Covid restrictions to last "well into February," says Coveney
23 hours ago
Josepha Madigan compares issues around schools reopening to Mother and Baby Homes
1 day ago
New weather warning issued as Storm Christophe passes over Ireland
2 days ago
INTO asks government to reconsider limited reopening of schools due to "grave safety concerns"
2 days ago
Wicklow woman walks one million steps for intellectual disabilities charity
2 days ago
Child hospitalised with head-lice as neglect goes unnoticed in lockdown, says report
Next Page