Do something with all those bump photos in your phone.

Ever looked at one of those cool pregnancy time-lapse videos online and wondered how you'd go about making your own?

The app was developed by a mum who also happens to work in computer animation.

Jasmine Katatikarn was inspired to create a visual record of her pregnancy after struggling with fertility issues for a number of years.

"I was so grateful when I had gotten pregnant after 6 years of trying that I knew I wanted to document it as much as I could," she told ScaryMommy.

She took a photo of herself almost every day for nine months and put it all together in one clip. 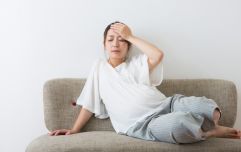 Suffering from morning sickness? Here are 5 foods that can instantly soothe your nausea

END_OF_DOCUMENT_TOKEN_TO_BE_REPLACED

"When I shared the movie afterwards, I received so many messages asking me how I created it and how they could make one themselves," Jasmine said.

With this in mind, she created Pregmo so all expectant mums can make their own time-lapses.

"It truly is such a special thing to have and I wanted everyone to be able to easily create their own. Thus Pregmo was born."

Jasmine's daughter Teagan, who was the growing bump in the time-lapse is now almost two and is set to be a big sister.

Jasmine and her husband Matt announced they're expecting baby number two recently, so we can definitely expect another time-lapse from her.

You can check out Pregmo here if you're interested in making your own.


popular
#Covid-19: Six-week-old baby dies after testing positive for coronavirus
Due in 2020? These baby girl names are sure to be popular in the coming months
The Vampire Diaries' Matthew Davis has revealed the name of his daughter - and it's really unique
No need to run to the shops: a recipe that will turn you into a bread making pro
Easter celebrations at home with your family! How to cook the PERFECT beef roast
Zara's €20 top comes in eleven different colours and it's the cosy comfort we need
Aldi makes going for short walks with the kids easier with their Buggyboard Mini
You may also like
2 weeks ago
Going again: How my second pregnancy was VERY different from my first
4 weeks ago
10 things to add to your hospital bag (that you might not have thought to pack)
2 months ago
3 fun (and not embarrassing) baby shower games everyone will actually want to play
3 months ago
Turns out sympathy cravings are a real thing and many men experience them
3 months ago
Been there, done that: HerFamily readers share THEIR best pregnancy buys
4 months ago
Apparently, women feel 'phantom' baby kicks even years after pregnancy
Next Page