The actress - who plays Amy Santiago in the comedy series - and her husband, David, revealed their happy news on Valentine's Day - noting that the newborn had "made Valentine’s Day my new favourite holiday."

She also revealed her newborn son's name - and it's definitely unique.

"Welcome to the world, Axel You have made Valentine’s Day my new favorite holiday," Fumero said.

Fans, friends and her Brooklyn Nine-Nine co-stars rushed to congratulate her on the happy news.

The actress revealed in November last year that she was "hella pregnant", as she shared a photo of her bump. 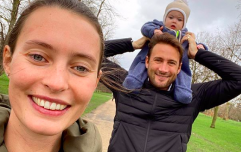 END_OF_DOCUMENT_TOKEN_TO_BE_REPLACED

She explained in the caption that she had been reluctant to share the news of her pregnancy as it had been more difficult this time.

"To be honest, I haven’t felt like posting about it because this pregnancy has been way harder and… I don’t feel that cute?" she said. "But yesterday I got a really intense massage, an awesome chiropractic adjustment, and my hair feels thicker - so I feel a little bit cute today."

Melissa and David are already parents to Enzo, who they welcomed in 2013.