Word on the street is that actress Emma Stone is expecting her first child with her comedian husband Dave McCary.

The two announced their engagement in 2019 and were married in secret sometime last year. The star has yet to confirmed her pregnancy, but The Daily Mail reports that the La La Land actress was spotted out for a walk with what looked very much like a baby bump.

The pictures were snapped while she was walking with a friend and Emma looks to be holding her tummy.

A source told Us Weekly: "She seems very happy and very excited about becoming a mother — she’s constantly oohing and cooing. She looks great, she looks healthy, she’s glowing.

"She’s been keeping up with friends and work lately, she’s always staying active and gets her daily exercise in." 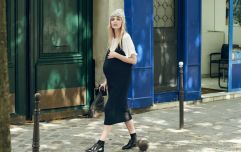 Been there, done that: HerFamily readers share THEIR favourite pregnancy buys

END_OF_DOCUMENT_TOKEN_TO_BE_REPLACED

The couple have been notoriously private with their relationship since they met, marrying in secret at some point last year surrounded by their close family and friends.

There has been a lot of speculation around the date of their milestones, as no one knows exactly when they got engaged or when they were married - apart for them, and their friends, probably.

The two confirmed their engagement on Instagram back in 2019. In May last year Emma appeared on Reese Witherspoon's Hello Sunshine series and was spotted wearing what looked like a gold wedding band, so of course rumours started circulating.

But according to sources close to the couple, they officially tied the knot just a few months ago in September 2020.

Congrats to the couple, exciting times ahead.


popular
Totally tropical baby names inspired by Hawaii
4 ways to fix hard slime with ingredients you probably already have at home
These 5 Foods Could Increase Your Chances of Having Twins
Born in 2020: The baby names experts predict will reign supreme in the new year
BREAKING: Schools are unlikely to open fully before St. Patrick's Day
'Soak it all in' – the words on enjoying time with your kids that will hit you hard
20 Unisex Irish Baby Names That Are Absolutely Magical
You may also like
3 years ago
Loved La La Land? Well, now it's coming to Ireland (kinda)
1 month ago
Babies born in December have some very unique traits – and you'll see why
1 month ago
There's no wrong way to talk about a miscarriage
1 month ago
"I tried to imagine how we’d heal:" Meghan Markle discusses miscarriage in candid opinion piece
2 months ago
HSE are no longer facilitating home water births after 'small number of incidents'
2 months ago
Rosanna Davison welcomes twin boys, Hugo and Oscar
Next Page