Gender prediction: 9 fun (and weird) ways to guess what you're having

Waiting to find out whether you're having a boy or a girl can be one of the most anticipated (and exciting) parts of pregnancy. In fact, if you're as impatient as I was, the suspense can be torture at times.

Even if you choose to find out at the 20-week ultrasound, you never REALLY know until the moment your baby is born. But that doesn't stop people from trying to guess the whole time.

Until the big reveal, here are nine fun, weird and entertaining ways, based on old wive's tales, to predict your baby's gender.

Take a look at the shape of your bump. According to this old wive's tale, if you look like you're carrying a watermelon, you're having a girl. If your bump resembles more of a basketball, you can expect a boy. 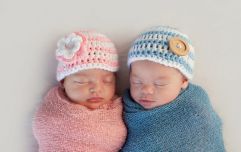 Boy or girl? These are the old wives' tales I found to be true during my pregnancies

END_OF_DOCUMENT_TOKEN_TO_BE_REPLACED

How fast is your baby's heart beat? Apparently, boys are more likely to have a slower heart rate - under 140 beats per minute - than girls.

Some people believe if you are having a girl, you crave sugary treats rather than salty or spicy. (This was definitely the case for me.)

The Chinese gender chart is an ancient method that uses your age at conception and the month you conceived, to predict your baby's gender.

There is a belief that girls steal their mother's beauty, hence the breakouts and dull hair. If, however, you've never looked better, according to this old wive's tale you're having a boy.

Again, this isn't a reliable way to predict your baby's gender, but it can be fun. Simply tie a wedding ring to a string and hold it over your bump. If it swings in a circle, apparently you're having a girl. It it goes back and forth, you're expecting a boy.

Peeing on a stick (reliably) informed you that you were pregnant. Now, peeing in a cup will (unreliably) predict your baby's gender. Using some bicarbonate of soda (and a urine sample), you can try the latest 'gender predictor' we've stumbled upon. Here's how.


popular
Tom Cruise slated for "inappropriate" behaviour around Kate Middleton
Warning issued to dog owners about the "big stretch"
Musings: 1 in 7 couples prefer sleeping in separate beds and I agree with them
Expert says Cocomelon acts "as a drug" to kids' brains
10 hotels with self catering that are perfect for a family staycation
Princess Charlotte's lavish birthday celebrations revealed
This Jersey Shore star wants to find her biological family after recently opening up about her adoption
You may also like
4 days ago
Downton Abbey's Allen Leech reveals second child's gender in the cutest way
1 week ago
Alec and Hilaria Baldwin reveal the sex of baby #7
3 weeks ago
The internet calls this dad's reaction to viral TikTok gender reveal a 'big red flag
3 weeks ago
Boy or Girl? Sam Asghari on his predictions for parenthood with Britney Spears
3 months ago
Nick Cannon is reportedly expecting his eighth child
3 months ago
Kylie's baby's gender? Fans are convinced a Kardashian has leaked the news
Next Page