Lucy Mecklenburgh and Ryan Thomas have welcomed a baby boy

Lucy Mecklenburgh and Ryan Thomas have welcomed a baby boy.

The 28-year-old confirmed their happy news with an adorable photo of the newborn, which showed his hand curled around her finger.

In the caption, she also shared the name that they had picked for their baby boy: Roman Ravello Thomas.

The couple had a massive year last year, after announcing their engagement in June and Lucy's pregnancy in late August.

In September, they shared a video of the moment they found out they were expecting a boy.

The footage shows the couple sitting in a cafe, with the printed-out version of the gender confirmation in Lucy's hand. 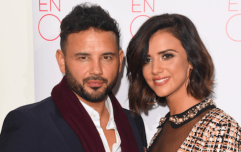 END_OF_DOCUMENT_TOKEN_TO_BE_REPLACED

"Shall I read it to you?" the 28-year-old asks him, before starting to scan through the papers.

Ryan is seen rubbing his hands together excitedly, before Lucy confirms they are expecting a baby boy - which causes him to burst into laughter.

"It's a boy," he shouts excitedly, before continuing the celebrations.

Lucy and Ryan announced they were expecting their first child together in late August - on the former TOWIE star's 28th birthday, to be exact.

The photo shows the pair sitting in front of a bunch of silver and gold balloons, as they hold up a baby grow.

"Best birthday present I’ve ever had. Love you," Lucy captioned the photo.


popular
Mini Bella Boutique is running a huge online clearance sale as it sadly closes
Attention parents and kids! Here are 3 simple but scrumptious recipes to keep you busy all afternoon
Kim Kardashian says lockdown has made her realise she doesn't want more kids
Dad hides coronavirus symptoms from hospital staff in order to see newborn
David Beckham shared his dinner on social media and we really wish he hadn't
How to potty train your toddler in three days, according to the experts
Due in 2020? These baby girl names are sure to be popular in the coming months
You may also like
7 months ago
Ryan Thomas and Lucy Mecklenburgh announce they're expecting a baby
1 year ago
Roxanne Pallett says PTSD led her to misinterpret Ryan Thomas 'punch' incident in CBB
1 year ago
CBB winner Ryan Thomas finally reunites with daughter Scarlett in adorable video
1 year ago
Ryan Thomas came out victorious on Celebrity Big Brother last night
1 year ago
Coronation Street star set to enter Celebrity Big Brother house this year
3 weeks ago
Grey's Anatomy's Camilla Luddington confirms she is expecting her second child
Next Page