Peanut ball: here's why having one could give you an easier, smoother birth

Labour is not easy.

In fact, it's really hard. It's stressful, it's painful, it's probably the most difficult thing the human body will ever have to endure.

That's why making labour that little bit easier should be at the top of everybody's agenda. After all, millions of women go through it every year, why shouldn't we take advantage of all of the ways that make the process more manageable?

One way that should make it go a bit smoother is the introduction of a 'peanut ball.'

Never heard of one? Don't worry, because we hadn't either, but now that we have we're going to be shouting its praises for the rest of our lives.

Similar to the traditional birthing ball, the peanut ball acts as a means to strengthen a woman's core while she's in labour, while potentially helping the process to go a lot smoother than it would otherwise.

When in labour, a woman's hips should be asymmetrical to help the baby's passage down the birth canal. It also helps to be upright and active, even though being positioned as such is probably the last thing our bodies want to do when we're about to give birth. 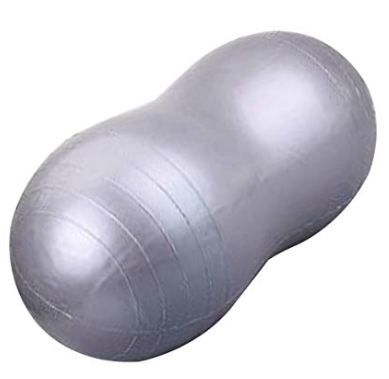 The inflatable peanut ball acts as a cushion that gives more pelvic space for the baby to deliver, aligning the hips correctly even when a woman needs, or wants, to be in bed.

END_OF_DOCUMENT_TOKEN_TO_BE_REPLACED

So essentially, it allows you to do all of the hard work while still lying down. Excellent.

However, if you can't manage to get your hands on a peanut ball - or indeed, birthing ball, while in labour, don't worry because there are plenty of other more common things you can use to ease the labour along.

Cushions or pillows are often propped between the legs to give more comfort or space, and although they do work, they can of course shift or move without warning.

The peanut ball is firm and flexible, meaning that it'll give you the optimum amount of support and comfort, while also ensuring that you're upright.

Something to consider, anyway.

You can check out some peanut balls on Amazon here.


popular
Trying for a baby? 11 sneaky signs you might have already conceived
A true classic! 10 timeless baby names that will never go out of style
These 5 Foods Could Increase Your Chances of Having Twins
Prince Harry praises Netflix's The Crown, says it's "loosely based on truth"
20 Unisex Irish Baby Names That Are Absolutely Magical
WATCH: The trailer for The Handmaid's Tale season four is finally here
4 ways to fix hard slime with ingredients you probably already have at home
You may also like
3 weeks ago
Babies born in February have some pretty cool advantages – no, really – it's true
1 month ago
There is something truly special about babies born in January, and you'll see why
2 months ago
Due date looming? Here is why you should make sure to pack peppermint oil in your hospital bag
2 months ago
Midwife claims making women give birth on their backs is "putting them through torture"
3 months ago
HSE are no longer facilitating home water births after 'small number of incidents'
3 months ago
"You recognise the fear, but you can't let it consume you" – Lisa Jordan on having a premature baby
Next Page