Pregnant in your 20s or 30s? Reese Witherspoon did both – and is very honest about which was easier

Let's be real: There is no right or wrong time to have a baby or start a family.

To some, having a baby at 20 is the perfect timing. To others, they might still feel like a kid themselves at 20, and it mightn't be until they approach 40 that they are in a place where a baby feels like the next step.

However, there is no denying that biology is biology, and while we still might look and act and feel 20 when we are 40, the reality is that pregnancy at this age can be both more complicated and tiring.

Reese Witherspoon recently shared how she experienced her three pregnancies – and how her first pregnancy at 22 was very different from her last one at 37.

The actress took to Youtube to share her real thoughts on parenting, on when the right time to have children might be, and the most important thing all parents need to succeed.

"I've been a mom since 1999," the actress and producer reminded us in a video for Hello Sunshine, her lifestyle brand.

"I got pregnant when I was 22. I delivered when I was 23. To be totally honest, it was scary. I was scared. I didn't know what it was going to do to my job or my career."

The 43-year-old went on to describe the complete loss of independence and shift in her thinking she underwent when daughter Ava (now 20) was born.

Thinking back a lot this summer. ☀️ Remembering when these two were little and all the fun summer trips! ❤️ #MarthasVineyard #FBF 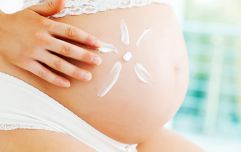 Five fantastic products that kept my skin glowing during pregnancy

END_OF_DOCUMENT_TOKEN_TO_BE_REPLACED

Speaking of her three different pregnancies, Reese revealed she found it physically more tiring to be pregnant on her third child, being 14 years older than she was having her first.

"I find having little kids is more physical, and it's just really hard on your body, so I am glad that I had kids kind of young," she said. Witherspoon had her second child, son Deacon, at 27, and her third, son Tennessee, at 37.

"And, oh, my God, having a baby at 37 was so much harder," the Big Little Lies actress revealed. "This is just me being real. Everybody's life experience, you have to do when it's right for you."

Witherspoon also revealed she found it hard being a new mum in L.A. and living so far away from her own mother, who was in Nashville.

"I joined a yoga group of women—literally just randomly found it on the internet, and they have been some of my greatest supporters," she said. "They would tell me what preschools to look at. They would tell me when I needed to get vaccinations, and they would tell me just everything. To this day, I'll say to them, 'Hold on, when are the kids supposed to be applying for college?' "


popular
The €9 beauty buy both Kate and the Queen (and every beauty editor) is obsessed with
Mum accidentally names twins after TV show and now wants to change their names
Irish parenting blogger shares shower cap hack to keep pram wheels clean
3 easy (and fun) Halloween crafts to entertain the kids with over midterm
New research finds a strong link between gut bacteria and a child's behaviour
10 extremely annoying things people need to stop saying to new mums
Eva Mendes has some thoughts on parenting through a goddamn pandemic
You may also like
3 weeks ago
Dunnes Stores launches brand new maternity collection – and it's not only affordable, but gorgeous too
1 month ago
Keeping it a surprise: 9 reasons NOT finding out the sex of my babies was the best thing ever
1 month ago
Whoops! Chrissy Teigen just accidentally revealed her baby's sex in the cutest slip of tongue
1 month ago
Meghan Markle craved one very specific thing when she was pregnant – and we're not surprised
1 month ago
Exercise during pregnancy can actually reduce your risk of complications by more than 25 percent
1 month ago
Pregnant this autumn? The 10 buys that will complete your entire maternity wardrobe
Next Page