She was overdue by two weeks.

Rachel Riley has given birth to her first child with husband Pasha Kovalev.

The Countdown presenter and proud 'Warrior for Truth' recipient welcomed her daughter this week in her home bathroom.

"Two weeks after we were expecting her this little one finally made an appearance!" Rachel said.

"After keeping us waiting she came so fast we didn’t get to hospital and was born in our bathroom with our amazing doula and wonderful St Mary’s midwives rushing over to be with us just in time!

"She’s absolutely perfect and Pasha and I are in newborn bliss. Couldn’t be more in love."

Rachel, who married Pasha in a secret Las Vegas ceremony earlier this year, was two weeks overdue when her daughter made an appearance. 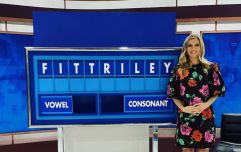 END_OF_DOCUMENT_TOKEN_TO_BE_REPLACED

The couple met during Rachel's stint on Strictly Come Dancing in 2013. She was eliminated during the series' sixth week, but remained close with Pasha.

The pair began dating officially soon after the show ended in December of that year. They announced that they were expecting their first child together in May.

Earlier this month, Rachel shared a photo of her extremely pregnant stomach, writing that she was very grateful for the support she had received from fans during her pregnancy.

"December is our baby’s birthday month(!!!), whenever it decides to make an appearance, so taking this last opportunity to thank the generous companies who’ve gifted us such gorgeous bits and bobs for our little one!"

She later added that she and Pasha planned to give the gifts to charity.

popular
These 40 baby names are set to trend in 2023
'Vile' TikToker blasted for comparing disabled kids to vegetables
'He's a changed man': Woman marries her 'high school bully'
Expert says Cocomelon acts "as a drug" to kids' brains
Little boy dies of cancer after doctors ignored mother's concerns six times
Bride asks for divorce day after wedding following groom's disrespectful cake stunt
Police believe they know what happened to missing dog walker Nicola Bulley
You may also like
1 year ago
Countdown's Rachel Riley potty trained her daughter at 3 months to save the planet
3 years ago
Rachel Riley and Pasha Kovalev got married in secret on the weekend
3 years ago
Rachel Riley and Strictly's Pasha Kovalev expecting first child together
3 years ago
The reason why Strictly Come Dancing's Pasha Kovalev left the show is actually really sad
3 months ago
What would you do? This woman's partner doesn't want their pregnancy
3 months ago
20 floral-inspired baby names which would be perfect for your little blossom
Next Page