This ultrasound scan has to be seen to be believed

Earlier this week an ultrasound went viral after showing some sort of figure alongside the baby (many believed it was a devil or a Hindu goddess).

Today another baby scan is doing the rounds and appears to show an angel watching over the unborn child.

Kelly Lewis shared the photograph with The Mirror and told the publication: “My friend saw the scan of the demon and it reminded him of my baby scan taken in 2012.

“It just looks like an angel leaning over my baby, with a cherub face as well as hovering over the baby. It’s so clear, no one could believe their eyes when they saw it.”

Kelly named her daughter, who is now three years old, Harper. Check out the scan below (we've circled the 'angel' for you)... 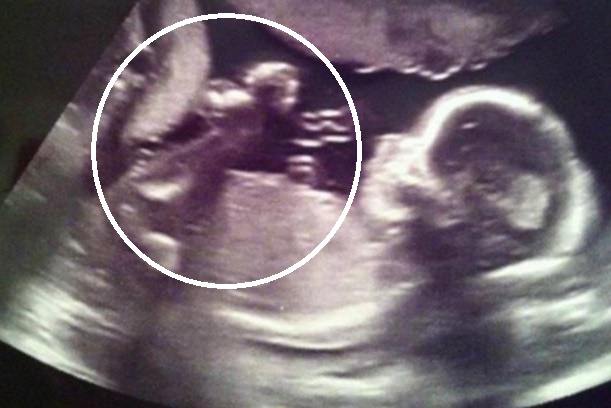 Image via The Mirror.


popular
Jacques O'Neill speaks out about Paige and Adam's relationship
Planning your next getaway? Here are 6 fun family activities to try this summer
Barry Keoghan announces the name of his baby boy
4-year-old girl killed in house explosion in London, police confirm
This mum's post about dying to send her kids back to school is too funny
Child killed in house explosion in London
Musings: I think 'Lawnmower' parenting is damaging for children
You may also like
1 day ago
Osteopath shares mesmerising trick that calms colicky baby in an instant
3 days ago
Mum's hack for getting your kids to listen without having to yell goes viral
3 days ago
Creative mum reveals tricks to occupy kids on weekends without spending money
4 days ago
Parenting influencer accused of exploiting her toddler and attracting predators
1 week ago
Sonya Lennon reveals ‘judgement’ her daughter, 17, experienced when buying pregnancy test
2 weeks ago
Confession: "I spy on my husband to make sure he is cleaning"
Next Page