There's something so lovely about bump photo shoots.

It's important to celebrate women's bodies at all stages of life, which is why we're delighted to see Vogue Williams proudly bearing her bump on the cover of this month's Stellar magazine.

The presenter shared a snap of her cover on Instagram today, writing; "So much fun working on this."

The image is typical of what the 32-year-old has shared throughout her pregnancy - she's been posting snaps of her growing bump on social media since confirming that she was expecting earlier this year.

That's not to say that she hasn't had to deal with some body-shaming along the way. 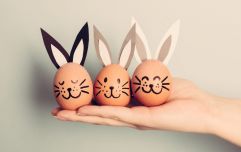 END_OF_DOCUMENT_TOKEN_TO_BE_REPLACED

Vogue recently revealed that she'd been on the receiving end of some hurtful comments her figure.

"People said I looked fat at my baby shower - I was seven months pregnant at the time," she said on ITV's This Morning.

"When online it’s so easy to be negative and hide behind a computer and put anything you want... being fat shamed at seven months pregnant was like water off a duck’s back but at any stage to fat shame any women is awful."


popular
Stacey Solomon defends choice to let son play outside after receiving nasty messages
#Covid-19: "I was shamed for being there and my child left crying' – a single mum on food shopping during lockdown
The largest family in Britain have just welcomed baby number 22
You only need five ingredients for this delicious Maltesers and Baileys fudge
#Covid-19: Pharmacist shares how to tell the difference between hay fever and coronavirus symptoms
Do babies in Ireland still get the BCG vaccine to protect against tuberculosis?
8 foods that can REALLY help your baby sleep better (we swear!)
You may also like
6 days ago
#Covid-19 : HSE guidelines regarding expectant mothers and coronavirus
1 week ago
'This conversation happened almost every day' Mum criticises her daughter for wanting an epidural
1 week ago
Hospitals start to request mothers not have birth partners amid COVID-19 outbreak
2 weeks ago
Video of baby in amniotic sac shows what they get up to when they kick
2 weeks ago
"You wouldn't run a marathon without training for it" – a Rotunda physiotherapist on exercising in pregnancy
2 weeks ago
Vogue Williams says she feels more relaxed about her second pregnancy
Next Page