We're delighted for them.

Yesterday, Vogue Williams and Spencer Matthews announced that they are expecting a baby together.

The pair announced the news on social media, with an Hello! Magazine exclusive, saying that they are more than happy to shares the news with their family and friends.

I couldn’t be more delighted to announce that we are expecting our first baby! Being with you @spencermatthews is the best thing that has ever happened to me, you are the dream ❤️?❤️ @hellomaguk

The 31-year-old Dubliner said: "I couldn’t be more delighted to announce that we are expecting our first baby!"

In the magazine spread, Vogue revealed that she suffered from morning sickness in her first trimester, but "I’ve got my energy back now though, and I’m feeling brilliant," she told Hello!. "It’s quite joyous to be in this stage now."

And as for her growing baby bump, the DJ said: "I can see it in my tummy. I’ve always tried to keep a toned stomach; well, that’s gone! I want to have the full bump now already because I sort of look like I just had a big meal last night." 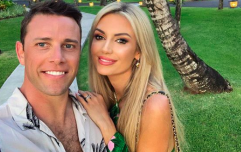 END_OF_DOCUMENT_TOKEN_TO_BE_REPLACED

Spencer added: "I think we were more taken aback by how quickly it had worked, as opposed to the fact we’re having a kid. Because we had already begun to try.

"So I just considered myself the luckiest man in the world when we got the baby news. We were heading down that matrimonial road anyway, so now we feel doubly blessed."

We're absolutely delighted for them and can't wait to follow Vogue on her pregnancy journey.


popular
Mini Bella Boutique is running a huge online clearance sale as it sadly closes
David Beckham shared his dinner on social media and we really wish he hadn't
Attention parents and kids! Here are 3 simple but scrumptious recipes to keep you busy all afternoon
Kim Kardashian says lockdown has made her realise she doesn't want more kids
How to potty train your toddler in three days, according to the experts
Due in 2020? These baby girl names are sure to be popular in the coming months
Katy Perry reveals the gender of her first child with Orlando Bloom
You may also like
3 weeks ago
Research proves that hugging our kids helps them become successful adults
2 months ago
Researchers find babies prefer the sound of other babies more than parent's voice
2 months ago
There's a reason that babies usually say 'dada' first and it's actually a good thing for mums
2 months ago
Gary Beadle 'praying' for answers as his newborn baby makes sixth hospital visit
2 months ago
Fair City's Amilia Stewart is 'counting down the days' until she gives birth
3 months ago
'I can't understand why some people are afraid to have a red-haired child'
Next Page