"I've just got to Chicago and I've been throwing up all day."

Following Amy as she tours the US recording comedy specials while heavily pregnant and suffering from hyperemesis gravidarum, the series documents the highs, the lows, and the hilarious moments of Amy's experience of being pregnant, and eventually giving birth, for the first time.

Directed and edited by Alexander Hammer (Beyoncé's Homecoming), the film tracks Amy for nine months as she tries to navigate her career,  her relationship with husband Chris, and the very concept of parenthood.

"Expecting Amy takes viewers behind-the-scenes as Schumer battles through an extraordinarily difficult pregnancy while documenting the formation of a comedy special," reads the synopsis.

"Schumer continues touring to prepare for the taping in Chicago that she isn’t sure she will be able to execute. 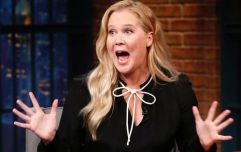 END_OF_DOCUMENT_TOKEN_TO_BE_REPLACED

"From hospitalizations to going out in front of a crowd of thousands, to quiet moments at home with her family, Schumer shares it all — beginning the day she found out she was pregnant, through the birth of her child. It’s like Jerry Seinfeld’s movie Comedian, if he had been pregnant."

You can check out the trailer here:

popular
'Don't do it if you are a parent' – paediatrician warns against viral organising hack
6 unusual and unique family-friendly activities to try in Ireland's Hidden Heartlands this autumn
The most popular children's books in Ireland have been revealed
Expert warns children are suffering 'burnout' from too many activities and sports
Here's when Florence Pugh's new Irish film lands on Netflix
Expert says Cocomelon acts "as a drug" to kids' brains
Well it's official, children misbehave the most around this parent
You may also like
8 months ago
Amy Schumer says she finally has her "strength back" after endometriosis surgery
1 year ago
Amy Schumer shares powerful advice as she undergoes endometriosis surgery
1 year ago
Amy Schumer is all of us when it comes to dealing with toddlers and screen time
2 years ago
Amy Schumer admits she had to change her baby's name – and the reason is hilarious
2 years ago
Amy Schumer has just shared her very first (and very spot-on) parenting advice
2 years ago
Amy Schumer shares her IVF journey and how other mums have helped her
Next Page