To most of us, giving birth is such a momentous moment, we can't imagine doing it without our partner there by our side.

However, this is not the case for everyone.

One woman recently took to Reddit to explains why she has told her husband she won't be calling him if she goes into labour when he's out with his mates.

"I won’t be calling him when I go into labour"

The woman, who is expecting her fourth baby and is currently just over 38 weeks pregnant, explained that her husband is rarely home.

"For about the last month my husband has barely been around," she wrote on the discussion site.

"He goes to work with his buddy usually until about dinner Mon-Fri. Comes home to eat dinner, watch the news, shower, and then goes out to see a different friend for the evenings usually coming home anywhere from 9-12."

She also explained that weekends are also spent with his friends and she's tried to talk to her husband about it, but he dismisses her and suggests she "make her own friends."

"Today his exact words when I said I don’t ask that much of him were 'yeah I know but if you had friends you’d ask even less'," she continued.

"He called this afternoon to tell me he wasn’t coming home after work and would probably be having drinks tonight with his friends and he then proceeds to tell me he fully intends to go to his buddy's party next weekend as well." 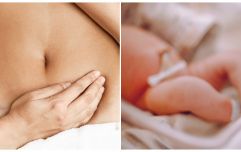 END_OF_DOCUMENT_TOKEN_TO_BE_REPLACED

The woman kept her cool and told her husband to have a good time, but it was his one last request just before he hung up the phone that kicked things off.

"He said if I needed him, to call. My response was no I wouldn’t be calling. If I went into labour I’d be calling someone else," she said.

"And now he’s mad at me saying that I’m being a child. But I see it as if he’s drinking this close to my due date and planning on drinking next weekend whether the baby has come or not then he clearly doesn’t care to be there. It’s not like I can call him and have him come home to go to the hospital with me drunk as a skunk."

She's asked if she went too far by excluding him from the birth of their baby.

"I wouldn't call him if the house was on fire"

To be fair, he doesn't sound like a very involved partner, and the good people of Reddit were quick to agree the woman clearly was in the right to say she wouldn't call him if she went into labour when he was hanging out with his friends.

"I am so sorry you're going through this," one person wrote as a reply to the post .

"You're telling me you have three other kids with this guy and he's never home with you or them? What the hell?"

Another one asked: "Do you have someone else who can support you right now? Because right now it’s pretty clear that you’re a single mother regardless of your marital status."

A third commenter took it even further and wrote:

"Four kids with someone who spends maybe two to three hours of awake time with the family per day. And that time is spent eating, watching the news, and showering," they said, adding, "OP, this is not a marriage."

"This sounds like you have an a**hole roommate you don't like very much. I wouldn't call him if the house was on fire.

"If he wanted to be with his family, he would spend time with his family. The guilt-tripping you for 'not having friends' is utter bullshit. Dump the dude and find a person who will at least make you a priority when you're about to pop out baby #4."


popular
Cleo Smith: Police preparing for "worst case scenario" as search for missing 4-year-old continues
Louise Redknapp was "quite shocked" by Jamie's wedding news
Newborn baby boy found alive in food delivery box
"We need our little girl home": Mum of missing 4-year-old Cleo Smith speaks out for first time
NWCI says garda’s 3-month sentence for domestic violence will discourage victims
70-year-old woman becomes first-time mum after welcoming baby boy
Is it fair for mum to choose which grandparent gets to first meet a new baby?
You may also like
2 days ago
This little boy has the most amazing reaction to his mum's pregnancy announcement
1 week ago
Paediatrician says children should 'share a bed with mum' until the age of three
1 week ago
This mum's chore chart for her kids is being praised as 'life changing' by other parents
1 week ago
Children are now apparently copying violent scenes from Squid Game
1 week ago
The tooth fairy letter many parents are feeling a little divided about
2 weeks ago
'Soak it all in' – the words on enjoying time with your kids that will hit you hard
Next Page