When I was pregnant, on both my babies, I literally craved the same three things: Watermelon – all day, every day. And Caesar salads – but it had to be the one from TGI Fridays. I know – bizarre.

And last, but not least – sour worms.

Seriously – it was only those three things that did anything for me when I was pregnant, but my God, did I have to have them – on a daily – and in the case of the sour worms, hourly – basis.

And so when I read recently that Chrissy Teigen's #1 pregnancy craving is sour sweets, I must admit I felt a little connection to her.

Especially when I read about her issues that came as a result of her mad sour sweets obsession – and really related.

According to videos shared on her Instagram, the 34-year-old has eaten so much sour candy that she burnt the skin on her tongue and it peeled off.

Yep, this can happen. 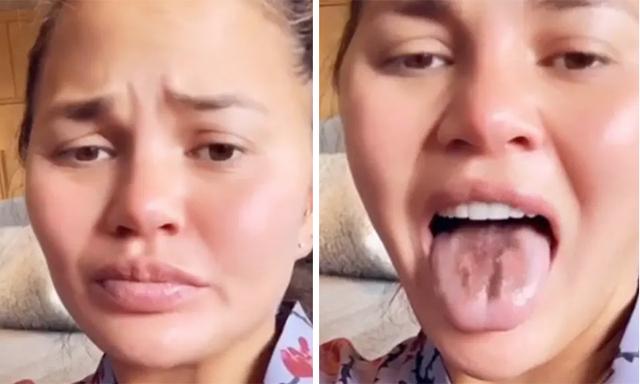 END_OF_DOCUMENT_TOKEN_TO_BE_REPLACED

The mum-of-two shared a video to her Instagram stories, where she gave her millions of followers a glimpse of her red and flaky tongue:

“Eating so much sour candy that my tongue is falling off,” she said before warning squeamish people to click out of the window before she held up what looked like a piece of skin.

Then she stuck out her tongue to show it all mottled and discoloured, and maybe even peeling.

Teigen admitted her sour sweets habit is worst at night. Which, interestingly, so was mine!

“It’s literally falling off because I eat so much in the night,” she explained. “I eat sour straws, I suck on them. Then after I have them, I have my Blow Pops and it’s just falling off… my tongue.”

Did you ever have any weird pregnancy cravings? Let us know in the comments.

popular
Breaking is the haunting novel parents need to read this October
Coco Austin comes under fire for bathing daughter (6) in sink
Smyths issues warning to parents ahead of Christmas
The rumours continue: Victoria and David Beckham 'are secretly separated'
Expert says Cocomelon acts "as a drug" to kids' brains
Parents warn new children's app is "basically Tinder for kids"
Call The Midwife's Helen George reveals baby no. 2's unique name
You may also like
2 weeks ago
Woman in Portugal gives birth to twins with different dads
1 month ago
Katherine Ryan opens up on becoming pregnant after two miscarriages
1 month ago
Girlfriend of late footballer shares pregnancy news one month after his death
1 month ago
Natal Active, the celebrity favourite activewear for Mums & Mums to be launches in Ireland
1 month ago
John McAreavey reveals baby number two is on the way
1 month ago
Covid-19 vaccine is safe for people during pregnancy
Next Page