Katy Perry admits to 'friction' in her relationship with Orlando Bloom

Days after announcing her pregnancy, Katy Perry has admitted to "friction" in her relationship with Orlando Bloom.

The couple have been on-and-off since they first got together in 2016 - but their relationship appears to be stronger than ever over the last few years.

In February last year, they announced that they had gotten engaged - and just a few days ago, Perry confirmed they are expecting their first child together.

The 35-year-old recently opened up about her relationship with Bloom during a chat with Ryan Seacrest on his On Air With radio show.

"I have consciously or unconsciously picked a partner that makes sure I keep evolving into the best version of myself," she said [via Metro].

"There’s a lot of friction between my partner and I, but that friction breeds something beautiful, it can breed a lot of light.

"It’s just one of those relationships. I don’t know about anyone else who’s listening what kind of relationships they’ve had – and I’ve had many – but it’s like we basically, we get down to the matt and come back up every time." 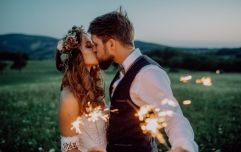 END_OF_DOCUMENT_TOKEN_TO_BE_REPLACED

Her confession comes days after she confirmed her pregnancy during the music video for Never Worn White.

After hinting at her pregnancy during a teaser for the video, the music video comes to an end with Perry standing in a white dress, holding her bump, with the final shot showing her wearing a sheer dress - giving fans a full view of her bump.

"There’s a lot that will be happing this summer, not only will I be giving birth — literally — but also figuratively to something you guys have been waiting for,” she said in an Instagram Live video after the Never Worn White premiere [via The Daily Mail].

"I’m excited, we’re excited, and happy. It’s probably the longest secret I’ve ever had to keep. I thought I would tell you guys in the best way through a piece of music."


popular
Apparently there are 5 different types of grannies, and which one do your kids have?
3 AMAZING beauty buys that'll give you that gorgeous summer glow (no sun needed)
An open letter to my daughter's creche – and all the people who cared for her
Here is why you should always take a picture of your oven before you go on holidays
Kristen Bell reveals the potty training hack that finally helped get her daughter out of nappies
10 beautiful baby girl names none of your friends will have thought of first
10 IRL struggles only breastfeeding mums will be able to relate to