While Destiny's Child went through a couple of incarnations you can't deny that the trio of Beyoncé, Kelly and Michelle is the most iconic.

When you think Destiny's Child they are the image that comes straight to mind and it is even more heartwarming that as well as being band mates these girls are also best friends in real life.

Like any true gal pals both Beyoncé and Michelle wanted to be their for Kelly during the recent birth of her second child and they made sure they could by watching the whole birth via Zoom.

In a recent interview Rowland revealed that her former bandmates had her back when she gave birth to her son Noah Jon in January of this year.

According to Rowland both Beyoncé and Michelle were with her every step of the way via Zoom showing her support and in person;

"We had our family join on Zoom. They were able to see Noah come into the world. It was beautiful.

The girls were literally over here at the house just recently and when they met the baby it was like another part of my heart just being able to share space with Michelle and Bey is truly a gift." 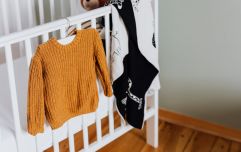 The cut of most kids clothing is too small for my child, what can I do?

END_OF_DOCUMENT_TOKEN_TO_BE_REPLACED

When you have just had a new baby there is absolutely no better feeling than knowing you have a shower of love and support around you when describing Michelle and Beyoncé Rowland said they are just awesome.

Most recently Rowland has been working on more music as a solo artist but there's nothing to say that we might not see another Destiny's Child reunion in the near future.


popular
"You're disgusting": Prince William roars at photographer who was 'stalking' his family
I tried 'slow parenting' for a year and I'm never going back
Mum asks what baby name combos to avoid and the results are hilarious
6 fun things to do in Dublin on your next family day out
Planning a family trip to Kerry? Discover everything Muckross House has to offer this summer
Lidl announces warehouse clearance sales with 80% off
Expert says Cocomelon acts "as a drug" to kids' brains
You may also like
2 years ago
Beyoncé has opened up about suffering a painful miscarriage before the birth of Blue Ivy
2 years ago
Beyoncé gives 'zero f*cks' about her weight fluctuating after giving birth and it's so refreshing
2 years ago
Beyoncé's dad Mathew Knowles reveals breast cancer diagnosis
2 years ago
Beyoncé's nickname for Meghan Markle is actually just perfect
2 years ago
This picture of Meghan Markle hugging Beyoncé will honestly make your day
3 years ago
Beyoncé opens up about her 'extremely difficult' pregnancy with her twins
Next Page