What a powerful photo.

Irish parenting blogger Tracey Quinn surprised fans recently when she not only announced that she had given birth, but that she had done so in her living room.

The mum and blogger went into labour suddenly last month and gave birth to daughter Willow in her own home.

Yesterday Tracey shared a photo from her dramatic labour and fans were blown away.

The mother of two said that she was in two minds about sharing the image but wanted to show the realities of childbirth.

"I won't lie, the pain blew me away. Literally took my breath away. I had an epidural on Billy so never experienced this active labour before. The sudden urge to push. The burning. I expected it all & prepared for it but the intensity took me by surprise & scared me."

I had the exact same experience on my second birth. Well not giving birth in the sitting room but the experience of natural birth. I had an epidural and c-section the first time I gave birth so I had no idea what to expect when my daughter decided to arrive so fast there was no time for pain killers.

Tracey then went on to say that even though the birth was painful and frightening she couldn't have been happier to finally hold her little girl.

" I am so grateful for every sensation I felt and honestly, truthfully, wouldn't change a single thing because I FELT it all. The pain. The relief. The joy. I was there. It was me." 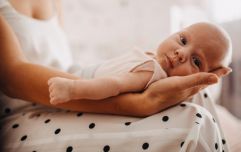 END_OF_DOCUMENT_TOKEN_TO_BE_REPLACED

I love that Tracey finished with the words 'it was me'. I think it sums up the feeling after you've given birth perfectly. There was definitely a sense of having more control of my body the second time around.

Quinn, who writes about family life, breastfeeding, weight loss and everything in between runs the blog Love of Living.

popular
Fans defend Khloe Kardashian for posing in hospital bed with her newborn
Breaking: Female child found with severe injuries in Co. Clare
Vicky Phelan speaks about how she dealt with the trauma of her daughter's accident
Vaccine programme to roll out in primary schools
School threatens to suspend pupils who don't follow "outdated" uniform rules
9 baby girl names inspired by Christmas carols
Adam Collard responds to claims he cheated on Paige Thorne
You may also like
4 days ago
"Best day of our lives": Irish model Kelly Horrigan welcomes her first child
1 month ago
YouTuber Keelin Moncrieff has welcomed her first child
1 month ago
Only women who live within 30 minutes of a maternity hospital can have a homebirth
1 month ago
Mandy Moore reveals unmedicated birth plan due to rare blood disorder
3 months ago
"Risking her life": Mum called out for wanting to give birth in Disneyland
3 months ago
My doctor yelled at me to be quiet when I was giving birth
Next Page