Have you switched it on yet?

Unless you're raising kids in a cave, if you're a parent, you probably know how massively popular CoComelon is.

The animation that kick-started as a YouTube channel has become a household name globally, with a solidified slot on the Netflix top 10, a range of toys, and even an upcoming live production.

Yep, CoComelon has a fairly strong grip on little ones and their parents hoping to keep them entertained for just long enough to get a basic task done.

Though some critics have branded the show as addictive and "hyper-stimulating" for kids, it topped the list of most-watched Netflix shows in 2020 and has been a mainstay in the top 10 children's chart in several countries.

A new show has dethroned it from its No. 1 spot on that chart on Netflix US, though.

Maya and the Three, a new animated series by the Mexican filmmaker who directed The Book of Life, is now topping the chart over there. 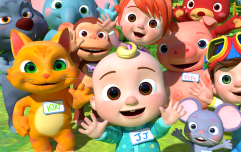 'CoComelon' set to go on tour with live production

END_OF_DOCUMENT_TOKEN_TO_BE_REPLACED

Starring Zoe Sandala, the show follows a Mesoamerican princess and her three protectors as they battle a range of gods of the underworld from Mayan mythology.

Despite being released just last week, its 9-episode first season has climbed to No. 1 on the list of kids titles and No. 7 on the television chart on Netflix US.

As of today in the Irish charts, CoComelon is still ahead of the new show as Maya and the Three is currently at No. 5. Still, not bad for a show that premiered last week.

CoComelon is in second place to Paw Patrol for now.


popular
Expert says Cocomelon acts "as a drug" to kids' brains
David Beckham is criticised for kissing daughter Harper on the lips – again
Not every parent will agree with this mum's stomach bug hack
"A special girl": Ashling Murphy's parents pay tribute to their daughter
4 ways to fix hard slime with ingredients you probably already have at home
Can you pronouce these 7 'unique' baby names? They're trickier than you think
Woman who revealed identity of Ana Kriegel's killer says it was "the biggest mistake"

You may also like
1 day ago
WATCH: The trailer for Love Is Blind season 2 is officially here
2 days ago
Huge amount of new evidence in Making a Murderer case could see Steven Avery freed
5 days ago
"Not ideal news": Selling Sunset's Heather Rae Young gives update on fertility journey
1 week ago
The Puppet Master: New Netflix docu-series could be your next true crime obsession
1 week ago
Netflix's The Lost Daughter praised for taboo representation of motherhood
2 weeks ago
Looking for something to watch in the New Year: New On Netflix For January
Next Page