The dating show presenter's second child was born this week.

The host of RTÉ 2's hugely popular First Dates has welcomed a baby boy with his partner Vjerana.

The couple have been together for 10 years. They already have one child, two year-old Isabella Luna.

Mateo, who is originally from Croatia, shared a precious snap of his newborn child on Instagram earlier this week.

The First Dates' star captioned the photo "Joy nbr 2 is here", and embellished his captions with a series of emojis. He posted a picture of the baby's tiny legs, as well as one of himself wearing the necessary Covid-19 protections in the hospital.

The couple were immediately met with well-wishes and congratulations on Instagram.

Mateo and Vjerana got engaged several years ago, but they're not planning on tying the knot any time soon.

Earlier this year, the dating show host told The Sunday World that when they had their first child, they put marriage on the long finger. 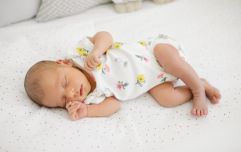 END_OF_DOCUMENT_TOKEN_TO_BE_REPLACED

"We got engaged, we had a child and that wasn't a priority and then Corona happened and now we have another baby on the way. The last thing we think about is us."

He told the newspaper that the couple's second child is a "Corona baby".

"Nobody has a plan, and nobody is ready for children," he said. "Not for the first, second or third."

He added that as well as Isabella, the family have a fur baby.

"Right now it's like we have two kids in the house because we have a puppy," he said. "She will grow up with my daughter, they love each other."

Mateo also spoke briefly about his daughter's personality, saying that she takes after her father.

"She has her own set of rules," he said. "Nobody listens to me in the house anymore. I need to go back to work."


popular
This mum can't understand why no one likes her 'teacher gift' idea
A controversial new sex education programme for catholic primary schools is causing uproar
FM104 apologise for "making light" of voicemail from 4-year-old boy with additional needs
This 23-year-old is mother to 21 kids... and she wants MORE
Child dies in tragic paddling pool accident in Co. Roscommon
"My sister-in-law stole my baby name and now she's mad I'm still using it"
You can buy this incredible Outdoor Inflatable Play Centre at Aldi!
You may also like
1 year ago
First Dates contestant bravely shares abusive relationship story
1 year ago
Michael and Lorraine had a swell time on First Dates last night and it was so pure
2 years ago
Domestic abuse survivor and mum-of-four inspires hope on First Dates Ireland tonight
3 years ago
Boy who lived in garden shed for five years says he didn't have 'typical upbringing'
3 years ago
Everyone is having a laugh about this one thing on First Dates Ireland tonight
3 years ago
One First Dates Ireland contestant annoyed a lot of viewers last night
Next Page