"That's my sanctuary and something I love to do."

Khloe, who welcomed daughter True in April, has already gotten back into the swing of things by returning to her old workout regime.

The reality star said that she hits the gym five or six times a week and that exercise is her "sanctuary."

"What I'm annoyed about is that I've read a couple of times on Twitter that, you know, they feel that I'm focusing too much on my body, but the truth is, I've worked out five or six days a week before I got pregnant and that's my sanctuary and something I love to do," she said on her Instagram story.

"So I want to start doing that now and getting into my rhythm and in between feedings I want to find time to work out because that's going to be my new normal.

"Just because I have a baby doesn't mean I have to stop doing the things that I love, and I love working out and getting my mind right." 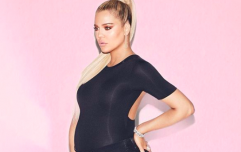 END_OF_DOCUMENT_TOKEN_TO_BE_REPLACED

Her body took a while to re-adjust to working out, she added.

"The beginning parts of working out kind of suck because you're pushing your body so hard, you're so tired, and you're trying to get back into your rhythm.

"It's much more difficult than I think you expect it to be.

"I've been working out for 11 days now, I feel really good, but tired. My body is sore because it's re-waking itself back up."

We say fair play to Khloe - new mums should do whatever they feel their able to and anything that makes you feel like your old self after having a baby is well worth it.